With the Women’s Army Auxiliary Corps having already paved the way for women’s service in the military, the Navy soon followed suit with the formation of their female reserve unit, Women Accepted for Volunteer Emergency Service (WAVES) on this day 70 years ago. The Navy had long considered allowing women to serve, but hesitated until the attack on Pearl Harbor necessitated more manpower. First Lady Eleanor Roosevelt also served as an advocate for the creation of a women’s branch in the Navy. Unlike the WAACS which were an auxiliary unit to the Army, at least initially, the WAVES began as a fully incorporated reserve unit with equal ratings and pay to men serving in the Navy. Women serving in the Navy was not a completely new phenomenon. During the First World War, women known as “Yeomanettes” served their country in the Navy.

WAVES’ service was initially limited to the United States, but by late 1944 they were sent to Hawaii and Alaska. To qualify, a women must be between the ages of 18 and 36, or 20 to 50 for officers, and pass aptitude and health exams. Once sworn in, an unmarried WAVE could not marry a man serving in the Navy, and couldn’t marry at all until training was complete. Women with children could not enlist. Those who qualified were trained at various women’s colleges around the country including Smith, Wellesley, and Hunter. Though trained and assigned ratings in many different occupations, the majority of WAVES were assigned to aviation units, followed by hospital and clerical duties. By the end of the war, approximately 86,000 WAVES had served their country, freeing up as many men—one estimate is enough to man a battleship, two aircraft carriers, and two heavy cruisers—to serve overseas.

Morna Dusenbury was working as an artist for New Orleans’ Times Picayune newspaper when she volunteered for the WAVES in October 1942.  Accepted for service, she attending training at Smith College and was commissioned as an Ensign on 16 December 1942.  Ensign Dusenbury was then assigned as an operations officer at the Naval Air Station in Norfolk, Virginia.  Arriving  in January 1942, she remained there until reassigned to the Air Naval Commander in Seattle on 11 August 1945 after a promotion to Lt. (jg) in March 1944.  With the surrender of the Japanese on 2 September 1945, the military began discharging the reservists, and Ensign Dusenbury was discharged from active duty on Christmas Day 1945.

WAVES summer weight uniform, which would be worn with a neckerchief and rating insignia on the left sleeve. Gift of Jane Dusenbury Culver, 2001.321 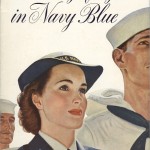 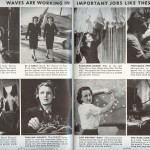 Descriptions of the type of work WAVES were assigned to as listed in a recruitment brochure. Gift of Dorothy Guthman Schlesinger, 2000.126 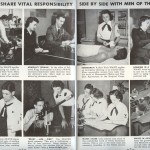 The WAVES sought to equate the value of their service to that of men serving in the Navy. Gift of Dorothy Guthman Schlesinger, 2000.126

Units of WAVES march in formation during a rally at the Washington Monument in celebration of the second anniversary of the establishment of the corps. Washington, D.C. 31 July 1944

U-166 in the Gulf Introducing SciTech Tuesday!