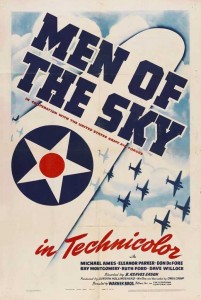 Seventy years ago today, Warner Brothers Studios released the film short, Men Of The Sky, directed by B. Reaves Eason and written and narrated by Captain Owen Crump.  Men Of The Sky was the second film short released by Warner Brothers with cooperation from the United States Army Air Force and its nascent First Motion Picture Unit – the first military unit entirely composed of professionals from the film industry – which was formed seventy years ago this month on July 1, 1942.  Like its predecessor short, Winning Your Wings starring Jimmy Stewart, Men Of The Sky sought to raise morale and spur enlistment for the air service.  Warner Brothers would release two further wartime shorts, Beyond The Line Of Duty and The Rear Gunner both starring Ronald Reagan, before the growing demand for training films became overwhelming for Warner Brothers and the First Motion Picture Unit took over as the USAAF’s primary film production unit; adopting the line ‘We Kill ‘Em With Fil’m’ as its motto.  Both Crump and Eason would continue to work with the First Motion Picture Unit, which released over 400 films before the war’s end.