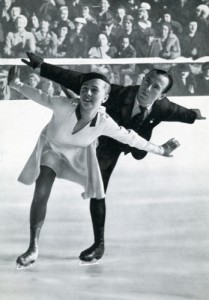 With opening of these Games, it can be a time to pause and reflect on the “lost” Olympics of 1940 and 1944. The athletes who hoped to compete in these games lost their chance to demonstrate their skills at the highest level. The last Games to take place before the War, the Games of the XI Olympiad in 1936, also known as the Nazi Olympics, were a sign of the troubling times that the world was to endure.

The 1936 Olympic Games is a confusing study. The most hospitable and dramatic Games up to that point were hosted by one of the cruelest regimes in history. Awarded to Germany in 1931, the Games of the XI Olympiad became a propaganda spectacle for the Nazi Party. With the full financial and organizing force of the Nazi government behind the planning, the 1936 Games transformed the Olympics from an underfunded amateur competition into a spectacle that nations could look toward for both an economic and public relations boost.

German Olympic Committee officials Carl Diem and Theodor Lewald undertook the massive responsibility of planning Games that would outdo the 1932 Games in Los Angeles and meet the Nazi Party’s standard for large, organized events. During the preparations, the Nazi Party removed Lewald, who had Jewish ancestry, from his official post as Olympic Committee President and demoted him to advisor. Despite the change, the remaining members of the German Olympic Committee were determined to outdo all previous Olympic hosts in size, accommodations, and pageantry. 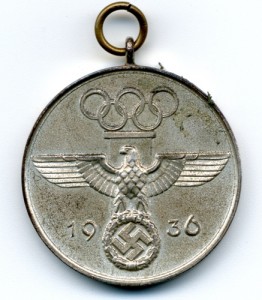 A medal that was awarded to civilians and foreigners who assisted with the planning of the Games. The National WWII Museum, Inc., 1994.001.0252

One of the most defining innovations of the 1936 Olympics was the Olympic Torch Relay. Never before in either the ancient or modern Olympics had a torch been lit in Athens and carried to the Games. With cooperation from Greece and every nation along the route, the first Olympic torch arrived in Berlin for the opening of the Games via a young male runner chosen by Hitler himself for embodying the Aryan ideal. The Games were also the first to be televised with closed circuit feeds present throughout the Olympic Village. Acclaimed filmmaker Leni Riefenstahl revolutionized sport documentaries with Olympia.

The Games are also famous for the accomplishments of American sprinter Jesse Owens. Owens, an African American, won four gold medals in the Track and Field events, prompting spectators around the world to declare that he disproved Hitler’s notions of Aryan superiority. Reporters at the time declared that Hitler had snubbed Owens by refusing to shake his hand. The previous day, Hitler had been warned about acknowledging athletes publicly. The president of the International Olympic Committee informed Hitler that he could not publicly congratulate only German winners. He must acknowledge all winners or none. Hitler, not wanting to cause a very visible international incident at the Games, decided to remain a spectator while in public view. Behind the scenes, however, he would congratulate all German medal winners.

Leading up to the Games, newspapers around the world had printed stories of the harsh treatment of Jews in Germany, and many attendees expected the worst. However, the picture of Germany seen by athletes and spectators was one of hospitality, order, and patriotism. In order to project the image a progressive, orderly nation, the Nazis ordered the removal of all public anti-Semitic signs and publications. The open persecution of Jewish citizens was effectively put on hold in all areas that could be accessible to outsiders. Some reporters and Olympic officials hoped that this signaled a softer approach to racial issues in Germany, but it was short lived. Members of the International Olympic Committee were confident that hosting the Games had positively influenced Germany and would make them more cooperative in international affairs. After the Olympics ended, the Nazis were even more emboldened and took further steps to marginalize and persecute Jews, political dissenters, and other “undesirables.” In fact, Hitler was planning to make the Olympics his own, permanently stage the Games in Nuremburg beginning in 1944.