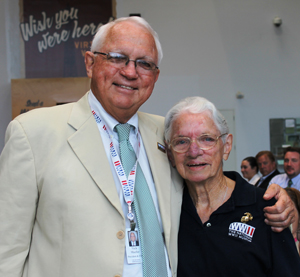 Grace O’Connor Hogan was 15 years old when her only brother Joe left New Orleans to serve in the Marine Corps. She can still recall being anxious as she told Joe goodbye before he shipped out to the Pacific in 1944. Despite reassurances from her father that everything was going to be alright, Grace was still afraid something was going to happen to her big brother. Thankfully, Joe did come back to his family after his service, living in New Orleans until his death in 2000.

Grace is very proud of her brother and of all United States Marines. She shows it by volunteering at the Museum, which she has done almost since the day it opened. Last week, Grace was honored as the being the 2nd volunteer in Museum history to contribute 10,000 hours of service to the Museum (the equivalent of 5 years of full-time employment). The first volunteer to reach this significant mark was WWII vet, Tom Blakey.

“I am so glad to be a part of a place that will make sure that Joe and all the boys who served during World War II will never be forgotten,” Grace said.

Grace helps the curatorial staff organize and catalog historical documents and artifacts in the archives and collections. Some of those artifacts are very dear to her — such as Joe’s combat boots, which are displayed in the Museum’s D-Days of the Pacific exhibit. Prior to volunteering at the Museum, she had a long career as a medical technician and was the youngest person to ever graduate from Loyola University at 17 years old.

Find out how you can volunteer at The National WWII Museum.