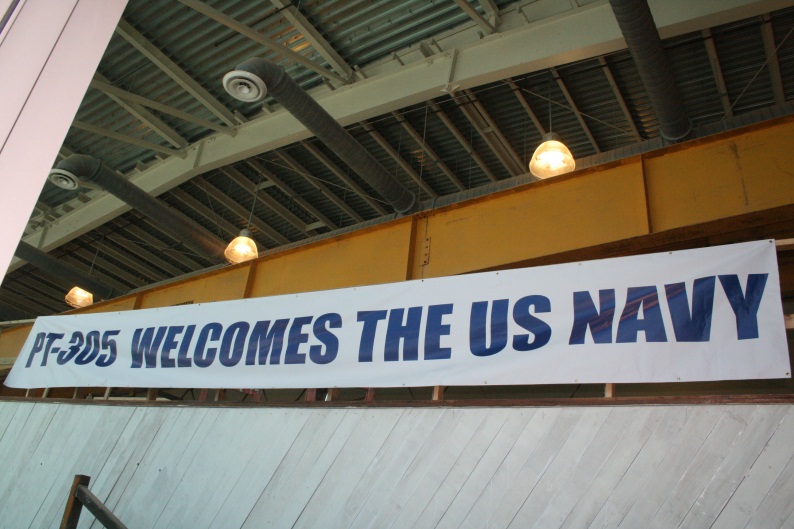 For a period of 66 years PT-305 went without the hands of enlisted US Navy men working on her, but that all changed on a recent Saturday. Throughout the morning, above the normal laughter of the crew and whir of the table saw, was the constant buzzing of random orbit sanders coming from PT-305. The engine room was alive, not with three Packard 4M-2500 engines, but with the hard work of five US Navy volunteers with the ships of NOLA Navy Week.

The PT-305 restoration crew is grateful to the US Navy and the eight volunteers who showed up to work, and work they did. Our normal finish paint crew consists of two people, George and Kali. George and Kali have a large task ahead of them, painting the interior of a 78-foot boat with three-inch paint brushes. This task is not out of their capabilities, however, the Navy crew that came in was a tremendous help. The engine room has been a constant focus during the restoration, there are multiple crews coming in and out. The wood butchers were rebuilding bulkheads and stringers, the engine crew was checking for alignment of engine beds with the shaft holes, the structural crew was replacing stiffeners and the electricians were planning routes for conduit. With all this activity, painting has been a complicated task – until the Navy showed up. The Navy crew, working with George and Kali, had the entire engine room sanded and painted shortly after lunch. The compartment is now clear for the rest of the crews to return to work.  What should have taken weeks was done in a day. 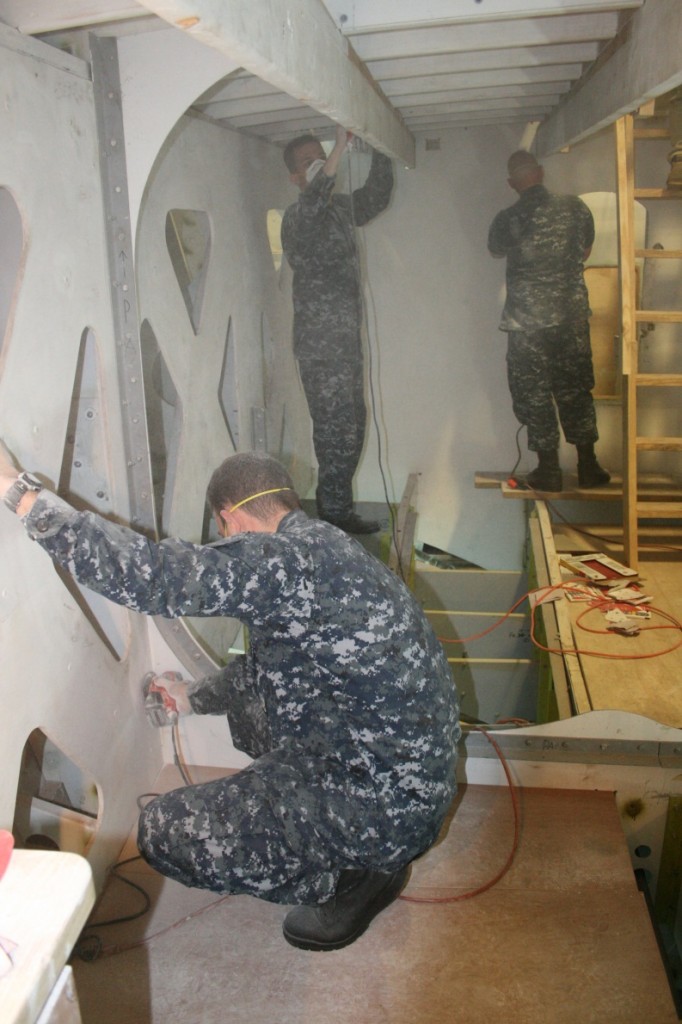 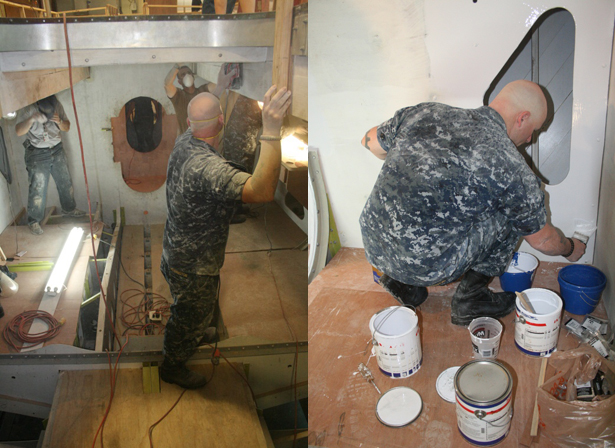 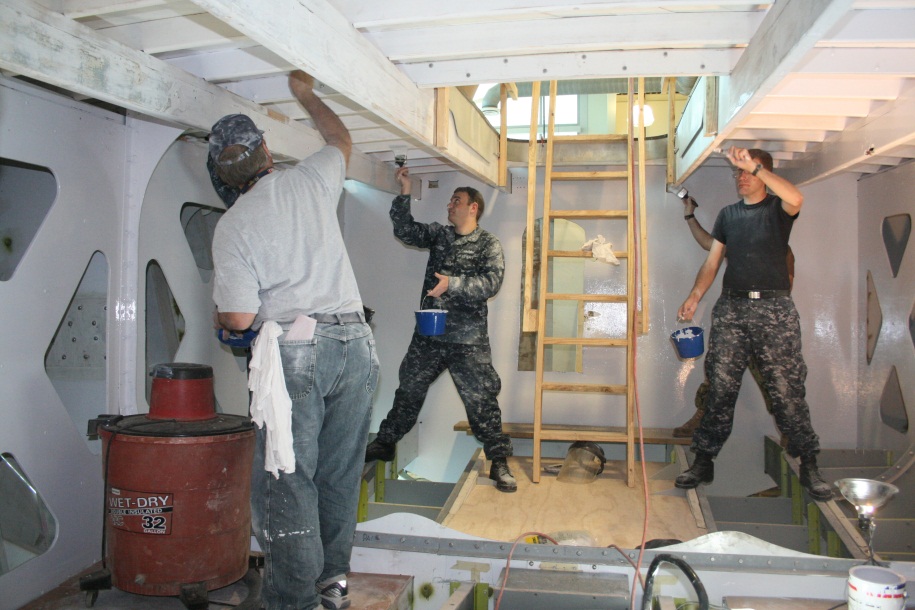 While five of the Navy volunteers sanded and painted, two more helped in the wood shop, working with the bandsaw to cut out hull ribs.  Each rib is made as a blank, and then the exact curve and length get drawn onto the blank with the use of a pattern.  The cutting must be precise so that the rib will fit perfectly into place.  After cutting out some hull ribs, they helped Josh with some deck rib work. 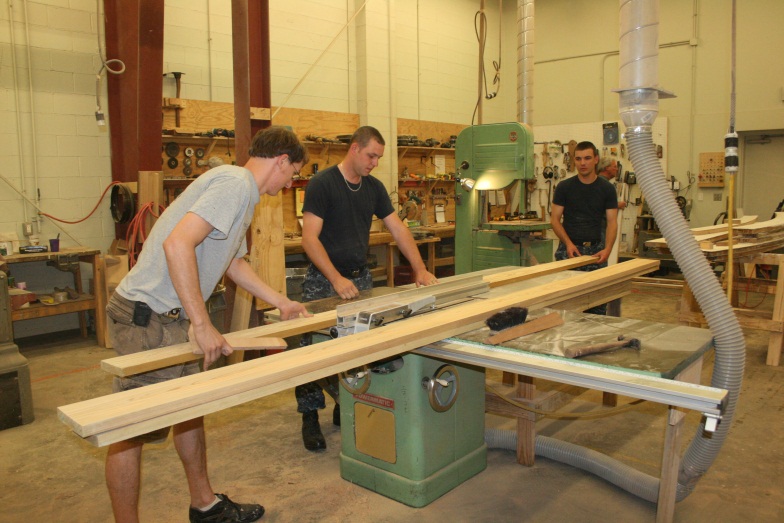 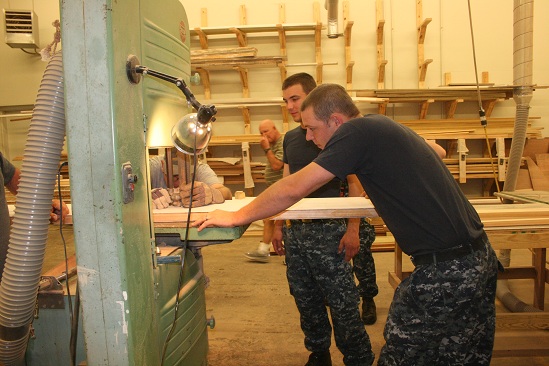 Civilian operations continued in the 20mm ammunition locker and at the bow of the boat. Frank and Conrad spent the day working on cheek blocks. Cheek blocks are attached to the side of the keel between hull ribs. These blocks provide support to the planking where it joins to the keel. The majority of these blocks are a similar shape, making them easy to mass-produce, however, the cheek blocks on the stem are all sorts of shapes. This complicated task has really forced Frank and Conrad to think. At this point the keel curves up to form the stem and the hull planking comes in at a sharp angle. They have to make blocks that are curved with multiple angles, a task that leaves them frustrated, but enjoying every second of it.

Our intrepid trio of Harold, Jim and Ed were busy perfecting work place sarcasm and finishing the ammunition locker. The 20mm ammunition locker sits in the middle of the officer’s quarters and underneath the chart house. The last few weeks have been spent putting in the walls, which run from the deck to the keel: this assembly looks like an elevator shaft. This Saturday, the boys framed and finished the top deck of the ammunition locker, forming the chart house floor. This was done by cutting large strips of mahogany and bolting them to the sides of the ammunition locker. After that was completed, strips of mahogany were placed across the box forming the floor. After a ¾ piece of marine plywood was cut to fit the top, the floor was complete. 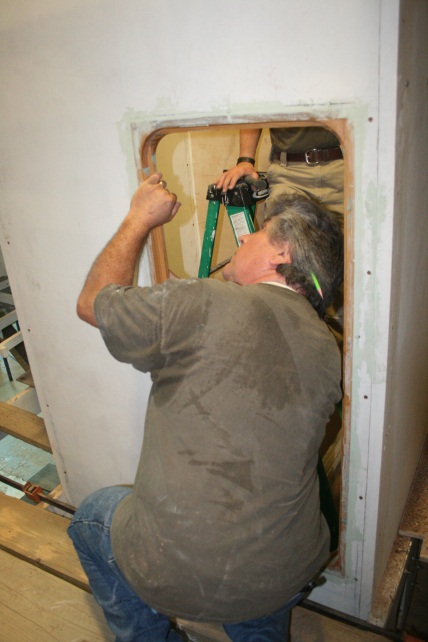 Ed leans into the access hatch for the 20mm ammunition locker, which is located in the middle of the officer’s quarters. 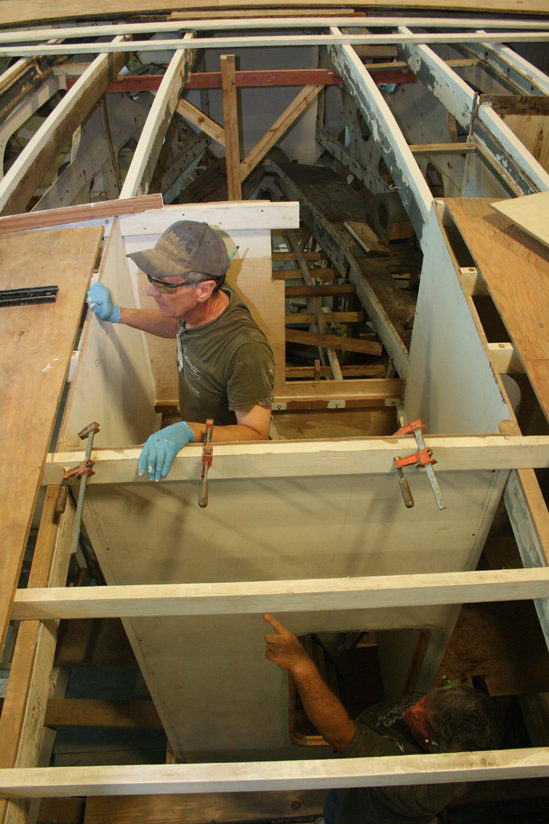 The radio operator’s position in the charthouse is above the 20mm ammunition storage. His equipment sits on the deck, while the operator stands on top of the 20mm storage, putting him at waist height with the deck. Harold (wearing a cap) is standing on a ladder finishing the installation of the charthouse floor. The radio operator would stand just a few feet higher than Harold does here. The gap to Harold’s right will have a ladder leading into the crews quarters, while Ed, at the bottom right, is in the officers’ quarters.

The compartment immediately aft of the officer’s quarters is a fuel compartment. The fuel compartment contains two 800-gallon fuel tanks with the officer’s head between them. Steering, bilge plumbing, forced air ducts and electricity all pass through this compartment. Because fuel tends to be combustible, each system is run through watertight fittings and kept away from the fuel tanks. The electric lines run through steel piping that keep the lines out of any direct contact with fuel tanks and fuel fumes. There are three of these tubes for each side, making a total of six.  Jim Rivers spent the day working on fitting the pipe conduit to the foreword and aft bulkheads in the foreword fuel compartment. 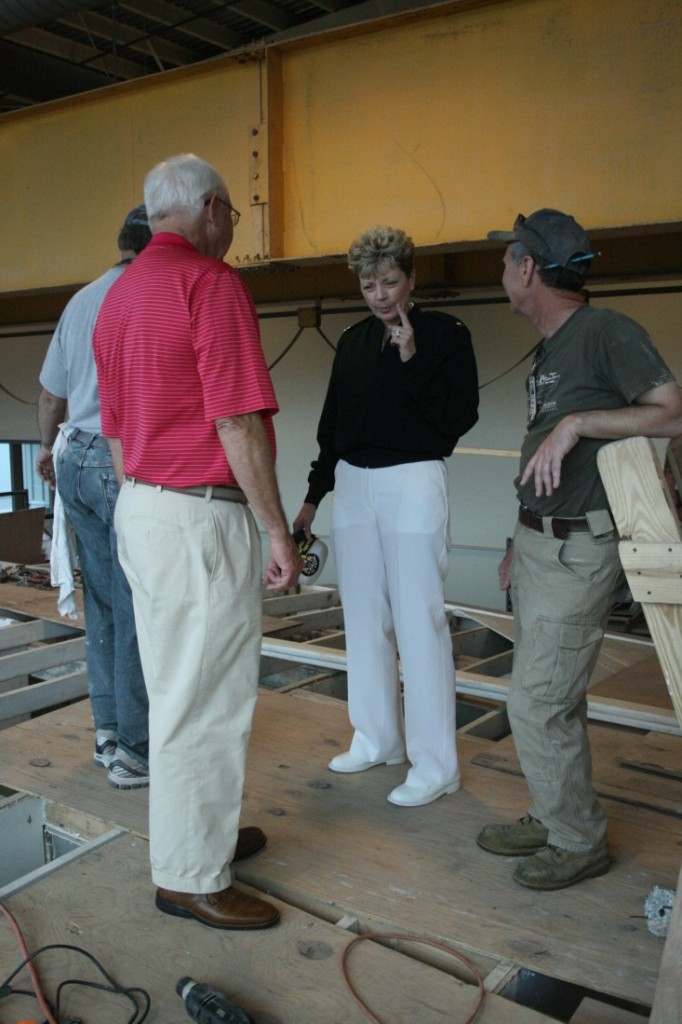 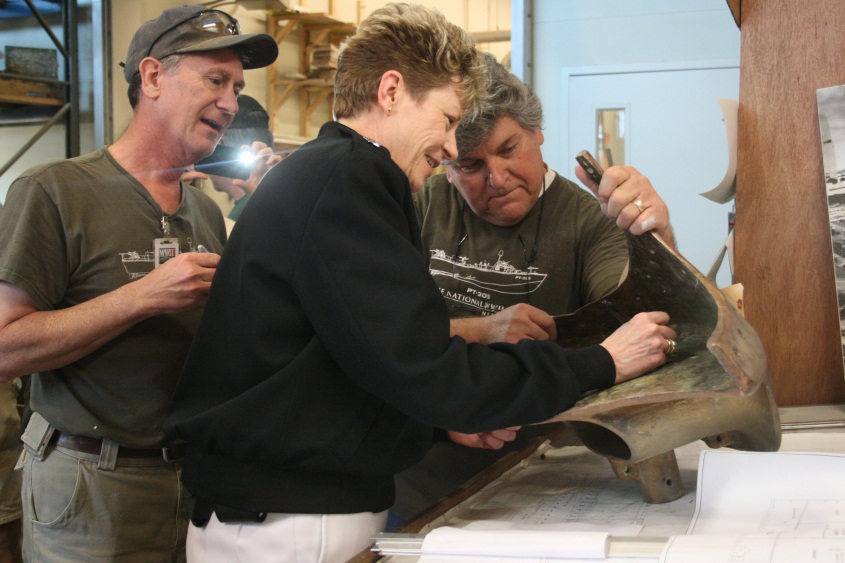 The PT-305 restoration crew would like to greatly thank Rear Admiral Phillips, the Navy volunteers, and all of the service men and women of different nations who came to see the 305.  We would like to extend a special thank you to the eight sailors who came and spent the day working with us:  Ensign Kenneth Pennington and Petty Officers Michael Wagner, Ken Besso, Russell Poyner, Chris Huddleston, Brian Schuler, Robert Hoffman and Leary.  Bravo Zulu to you all! 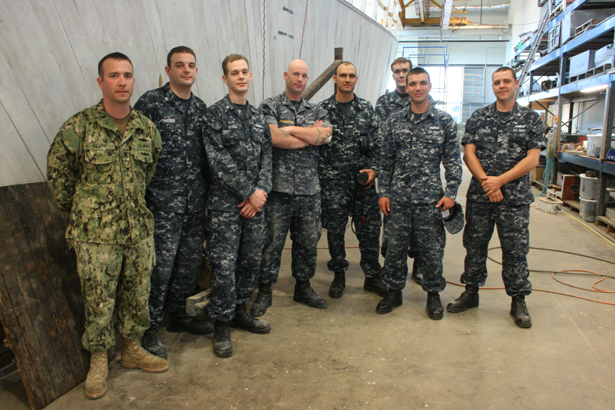 In Their Own Words: Eugene Sledge on V-E Day Worker Wednesday