The major goals for the PT-305 restoration crew over the last few weeks have been the fitting and installation of the stem, building the ammunition locker, and the replacement of hull and deck ribs.  With the “Wood Butchers” hard at work towards these goals the front section of PT-305, she is on the verge of having all of her hull structure back into place.

The stem is the upward curving extension of the keel at the bow, which forms the very front of the 305.  This installation brings the keel, sheers and chines all together, which makes it an important structural element in the hull. With the sheers complete, the last few weeks have been spent building and installing the chines. 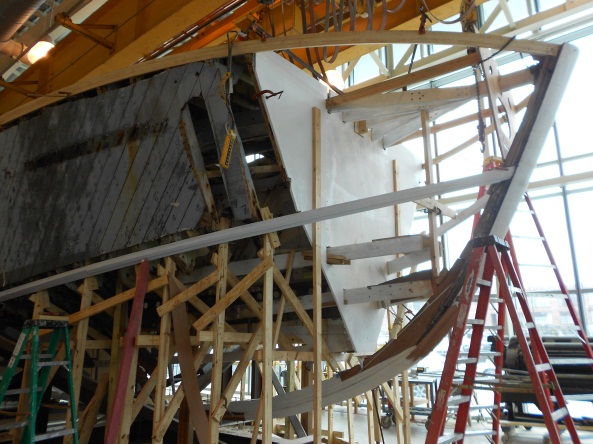 The chine of a boat is the meeting of the side and lower hull.    In the case of PT-305 it is a hard chine, meaning there is a sharp angle that defines this intersection. The chine runs the length of PT-305 on the port and starboard sides.  Due to the deterioration of the existing chine it was decided replace the foreword 20 feet of the port and starboard chines, splicing it into the original chine.

After a few lessons learned in gluing up the sheer, which included splitting apart a 20 foot glued section as the crew tried to attach it to the boat, the process was streamlined, and project coordinator Bruce Harris and volunteer Frank came up with the plan of attack. Three boards would be glued together on the boat to get the curve, then they would be removed, shaped and reinstalled as finished pieces. This process  took three weeks to complete. After two weekends of glue-ups the chine was removed in order for Bob and Frank to use electric planers to shape it. Once both port and starboard chines were shaped they were installed, clearing the way for the installation of the stem. 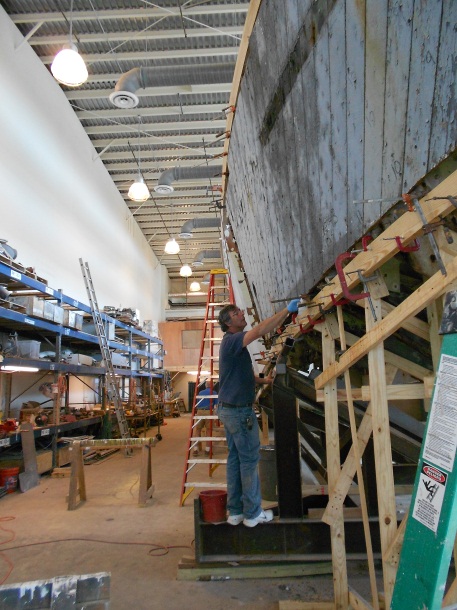 Weekday volunteer Louis works on clamping a freshly glued piece in place on the starboard chine.

The crew created the components which make up the stem by gluing multiple layers together to from blocks of wood .  These blocks were then shaped into the forefoot and the backing block.  The final piece, the stem, was rescued from PT-659 when she was scrapped.   The forefoot and backing block were the first pieces permanently installed.  The stem installation could not be done until the chines and sheers were completed. 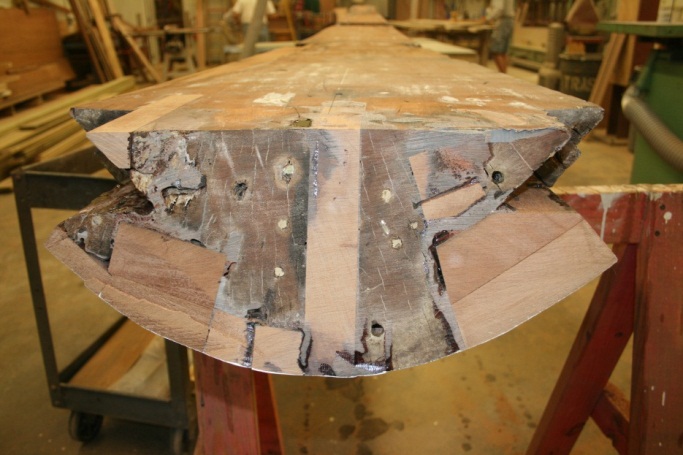 This photo shows the restoration work that can be done by the crew. This is the stem of PT-659, a Higgins WWII original, that has been restored by removing soft, rotten spots of the wood and replacing them with strong, new mahogany pieces.

Although backing block and forefoot had been installed permanently for several weeks, the stem had been held in place only temporarily.  In late March, the crew gathered at the bow of the 305 as Frank’s crew completed the process of permanently attaching the final stem piece.  With a few words from Bruce, and wisecracks and laughter from the crew, the large stem was lifted into place.  Surfaces were coated in a special flexible epoxy, and as several of the crew strained to get the large piece in place, bolt it to the backing block, and attach the chines and sheers properly, the whole crew looked on, took photos and made even more jokes at the expense of those actually doing the work. 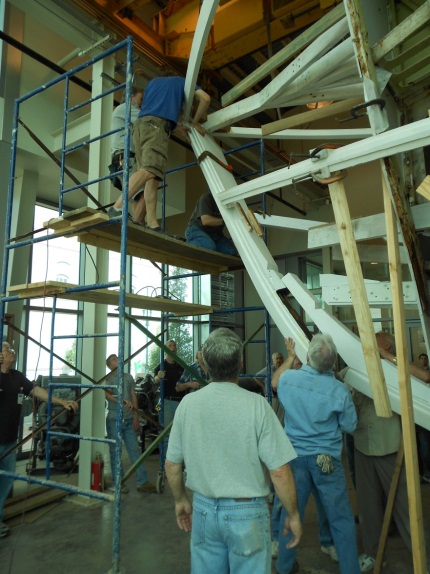 Volunteers wrestle the heavy stem into place. The piece had to be perfectly aligned so that it joined with six other pieces of the boat.

Inside PT-305, Ed’s crew has begun building the ammunition locker. This is where the 20mm and .50 caliber machine gun ammunition is stored. The locker is directly below the chart house and sits in the middle of the officers’ quarters. From the deck it looks like a plywood elevator shaft, and without any shelves installed it is a void from the deck to the keel. The sides of the box are joined by corner pieces with rabbets cut into them to receive the plywood.  (A rabbet is a ledge cut into the edge of a piece of wood.)  One side of the box is installed already, it’s an original bulkhead that is in place, and the other three sides have been rebuilt, having been removed by PT-305’s previous owners. These sides are 10 feet tall and take some muscle to wrestle into place. After a series of awkward lifts, the three sides have been clamped into place and are awaiting final fastening. 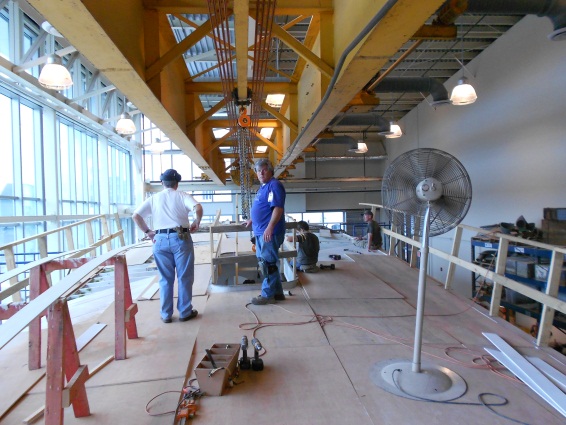 Ed and crew are on the deck while working on the ammunition locker. The plywood and handrails on the deck are only temporary, so that volunteers have a surface to walk on while working. When completed, the deck will be double layered, with a water tight layer in between the layers of wood. The handrails are for the safety of the volunteers. PT boats were not equipped with railings to prevent men from going overboard.

Though the ammunition locker has not been completed, Norman and Jimmy can begin working on the foreword half of the steering system. The steering system runs from the wheelhouse to the lazarette, the last compartment in PT-305. When the wheel which is above deck, is turned, it moves a chain, which turns a pipe.  . This pipe runs roughly 60 feet from below the wheel to the steering gear box, just above the rudders. This simple connection of a chain and a pipe to the ship’s wheel turns the two rudders of the 305, thus moving the boat as it maneuvers through the water.   At this stage Norman is measuring and plotting the route through the various compartments and bulkheads while Jimmy works on securing and restoring the hardware that supports the system. 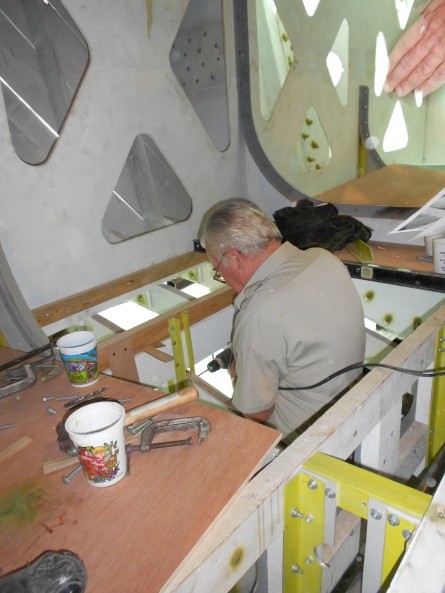 The engine room crew has been hard at work, installing all of the aluminum brackets and gussets which strengthen the engine room on the 305. This helps prevent wear and tear on the wooden frame from the boat’s three 3500-pound, 1500 horsepower engines.