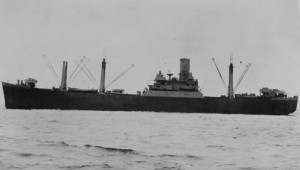 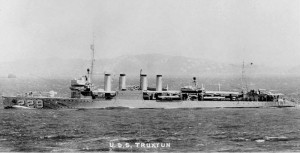 USS Pollux (left) and USS Truxtun before the tragedy.

On 18 February 1942, the USS Pollux* (AKS-2) and USS Truxtun (DD-229) were involved in a tragic accident off the coast of Newfoundland. The 203 lives lost, however, were not taken by enemy bullets or bombs, but were lost instead to the cruelty of the elements.

In the dark morning hours of Ash Wednesday, a particularly rough winter storm was raging in the Atlantic. With visibility at zero, the small three-ship convoy consisting of Pollux, Truxtun, and Wilkes had to rely on dead reckoning to navigate their course. Radio silence was maintained, so as not to attract the attention of German U-boats known to be hunting in the Atlantic.

Shortly after 0400 hours the Pollux and Truxtun grounded. Many sailors were killed by the impact, others when the ships flooded, and still many more from the freezing temperatures of the water. The ships were quickly sunk by the turbulent waves cracking them against the rocky cliffs of the shore. Of nearly 388 men serving on the two ships, more than half perished in the tragic accident.

One of those men, Lanier Phillips, remembers that day as the first day of the rest of his life. The only black sailor to survive the incident, Phillips initially hesitated to swim towards shore—he believed they were off the coast of Iceland where he had heard blacks were not welcome. This was the same reason his fellow stewards, relegated to that role by the US Navy due to the color if their skin, perished. They stayed aboard the ship, which sunk, in hopes that they would be saved by the Navy rather than mistreated by the racists they believed were on shore.

Phillips dove into the freezing water, feeling just a moment of pain, and then sleepiness—one of the symptoms of acute hypothermia. He was one of the few men able to make it to the shore where he was sure he would perish. He lay down only to be woken up moments later by a 16-year-old Gus Etchegary and Michael Turpin, who knew that he had to keep the freezing sailors moving to keep them alive.

A makeshift first-aid station was set up, and the women of the small fishing community of St. Lawrence worked together to help wash off the oil that covered the sailors head to toe. That oil, though, felt like a cloak of comfort to Phillips—a native of Georgia and son of a sharecropper—who feared that once the kind women discovered that he was black, he would be run off…or worse. Though perhaps a little naïve—the woman helping Philips had never seen a black man in her life—there were no bigots among them.

Philips was shocked by what ensued. Not only was he not kicked out of the town and beaten for letting these women bathe him, as he feared, but was instead invited into a family home, allowed to dine with them on the same China as them (as a steward in the Navy he had to serve officers on beautiful tablecloths and china, but he himself had to eat standing up in the pantry), and given one of the children’s warm bed to sleep in.

After the tragic incident and the kindness that followed, Phillips would never be the same. When verbally abused and physically threatened for sitting in front of a white man on a bus in Tennessee, Phillips recalled thinking about fighting for the first time. He had been hypnotized to believe that he was unworthy, less than human, having grown up in a small southern town where the Ku Klux Klan burned down the only school where blacks could get an education. But after the kindness he experienced in St. Lawrence, that spell was broken. He could see and feel clearly that he was just as much of a man, if not more so, as anyone else.

He says he never would have had the courage to write a letter that made history had it not been for his experiences in St. Lawrence. He wrote to a congressman and the Bureau of Naval Personnel expressing his desire to go to sonar school, something blacks were not allowed to do at the time. Surprised when allowed to go, he stood his ground when on the first day of class he was told he would fail, and to settle for a promotion to Chief Steward’s Mate. As you might’ve guessed, Phillips made it through sonar school with flying colors, becoming the first black sonar tech in the US Navy. He now lives in St. Lawrence, where his life was forever changed by the kindness of its people.

The town will commemorate the men who lost their lives on this day 70 years ago, and Dr. Phillips and the few other remaining survivors will be present to honor their shipmates. In the last few years, Dr. Phillips has received an Honorary Doctorate of Laws Degree from Memorial University. Just last year he was awarded with the Order of Newfoundland and Labrador for his lifetime dedication to the civil rights movement. He has also received the Lone Sailor Award from the Navy Memorial Foundation, given only to those “Sea Service veterans who have excelled with distinction in their respective civilian careers while exemplifying the Navy core values of Honor, Courage and Commitment.” Philips resides in Gulfport , Mississippi.

In his own words: listen to a 2003 NPR interview with survivor Lanier Phillips.

This post by curator Meg Roussel with help from Mayor Wayde Rowsell of St. Lawrence, Canada.

*Ironically, the Pollux shares its name with the Greek demigod Pollux, who along with his twin brother Castor make up the constellation Gemini, which is particularly associated with the patronage of sailors and the responsibility of keeping them safe.

I want to express my thanks and extreme gratitude to Mayor Wayde Rowsell and all of the good people of St. Lawrence for keeping the memory of those brave men alive through all these years. My great-uncle Clifford “Bo” Parkerson was signalman 3rd class aboard the USS Truxtun and I was lucky enough to visit St. Lawrence this past weekend for the 70th Anniversary memorial services. Our family knew very little about the incident for many years, as the US Navy being very busy with wartime preparations only informed the Parkerson family in Georgia that their son had drowned off the coast of Newfoundland. A little over a year ago, I came across the book by Canadian author Casey Brown, Standing Into Danger, and therein discovered the true details of this disaster and the heroic action of my uncle Bo, who lost his life on that fateful February 18th, 1942. The story is so compelling that my father and I got in touch with Mayor Rowsell and traveled to St. Lawrence, where I dare say we were welcomed with the greatest hospitality and true friendship that has ever been bestowed on us anywhere in the world. The people of St. Lawrence are truly amazing and deserve the eternal gratitude and recognition of the United States of America for their selfless acts of heroism and kindness. Thank you ever so much for keeping this story alive and making it part of our collective memory. Thank you to Newfoundland and especially to the people of St. Lawrence!
Nick Parkerson

i would like to know if there is a CD of some type of documentry on this incident,that i can purchase