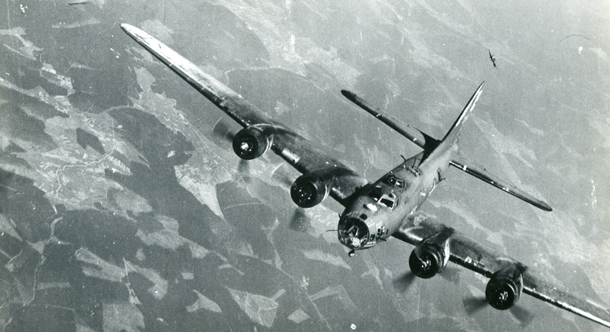 Ardell Bollinger had always wanted to fly. No matter what it took, the Pennsylvania bred boy wanted to be in the air when it came time for him to serve his country. Bollinger joined the Army Air Corps with the sole intention of joining the ranks of men flying above the earth and attacking America’s enemies through the air in 1942. “I knew that I wanted to fly, there was never any doubt as to where I wanted to go and fight.” recalled Bollinger. After taking his initial Air Corps training as a radioman, Bollinger was assigned to the fledgling 384th Bomb Group and learned his trade in the venerable Boeing B-17 “Flying Fortress”. The 384th began its training in Gowen Field, Idaho in December, 1942 upon their activation as a combat unit. The 384th were then shipped all across the country to locations such as Wendover Field, Utah and Sioux City, South Dakota. It was from there that the 384th received their orders for combat. Rumors ran wild amongst the men as to where they were to fight. Many men wanted to see action in the Pacific in order to carry the war to Japan, but others, such as Bollinger, just wanted to get the job done and weren’t concerned with whom they were to fight against.

On May 3, 1943 the 384th Bomb Group and Ardell Bollinger left the United States bound for England and the Eighth Air Force in order to conduct heavy bombing missions on Hitler’s Germany. The trip across the Atlantic took many days as the first of the bomb group’s “forts” arrived at their home field of Grafton Underwood on May 25, 1943. Bollinger and the 384th flew their first combat mission against the enemy on June 22, 1943 with a mission to Antwerp, Belgium. Ardell followed his baptism of fire with seven more missions to targets such as, Hamburg, Germany, Paris, France, Le Mans, France, and Abbeville, France. By September of 1943, Bollinger had completed eight missions as a radio operator in several different B-17’s.

Late 1942 and early to mid 1943 were hard times for the men of the Eighth Air Force. The Eighth was losing men and aircraft at a staggering rate, mostly to German fighter aircraft. Veterans from other bomb groups told grim tales of survival to the men of the 384th in the pubs all over East Anglia that summer and fall of 43. Bollinger recalls his memory of his first few missions, “I remember when we got there, and they told us that the life expectancy of a B-17 crewman was 5 missions. After my fifth mission, I figured, hell, I’ve already beaten the odds, I’m good to go, and only twenty more and I can go home.”

At this point in the European air war, the single most deadly enemy that 8th Air Force crewmen faced was the German daytime interceptor. After the early daylight raids into Hitler’s Germany it was seen that the American B-17 and B-24 raids were no mere diversion or joke. These daylight raids were something that the Third Reich had to pay close attention to or their war materiel production could be ground to a staggering halt by these American daylight raiders. As a result of the increasing attacks, Germany moved some of her best fighter pilots from the Eastern Front to Western Front in order to defend against and shoot down the ever-increasing numbers of American heavy bombers continuously pounding German industry almost daily.

The previous summer a young German fighter pilot named Herbert Huppertz was transferred from the Eastern Front to the Western Front to aid in the defense of the Fatherland. By September of 1943 Huppertz had already achieved the lofty status of Ace by destroying over 50 Allied aircraft. On September 23, 1943 this talented young pilot would have a fateful encounter with Ardell Bollinger and his fellow crewmen high above German occupied France.

“The September 23rd mission started off like any other mission. Wake up at 0230, breakfast at 0330, briefing at 0445 and sit and wait until we took off a while later. The damn waiting to go was the toughest part, that’s when you started thinking about things. You started thinking about what might happen to you. That’s when you got scared.” The target for 23 September was a submarine repair ship that was tied up in Nantes, France harbor. Ordinarily this would have been considered a “milk run”, an easy target, but today would not be a milk run, at least not for Ardell Bollinger and the crew of his un-named B-17 serial number 42-3459. Bollinger states, “I was flying with a different crew that day and knew just a few of the 10 men in the plane. Of the 10 guys in the crew, I was the one with most combat experience.”

As the B-17’s approached the French coast the German fighters received their alarm notices and took to the air to defend their territory. Hauptmann Herbert Huppertz and his squadron mates in Jagdgeschwader 2 “Richtofen” took off in their Focke Wulf 190 A-6’s to meet the aerial invaders. As Huppertz and his mates approached the large bomber formation they broke up into attack groups and came at the “Flying Fortresses” head on. “Everything was fine until we got over the enemy coast. Then it really started to hit the fan. The fighters started attacking us very heavily but our crew managed to avoid most of the attacks and got through the initial onslaught relatively unscathed.” Bollinger recalls.

During the bomb run over the target, German anti-aircraft artillery, known as flak, began to pepper the B-17’s heavily throughout the formation. Bollinger’s B-17 took several hits and began to lose power and drop out of formation. “I just recall us getting hit in an engine and the pilot, (Philip) Higdon, telling us that we were losing power and dropping behind the rest of the group. I knew that was bad news because the German fighters liked to prey on the wounded bombers. They were easier targets.” As Bollinger’s aircraft dropped out of their protective formation they came under almost instantaneous attack from German fighter aircraft. Herbert Huppertz and his FW-190 bore in on Bollinger’s stricken B-17 from behind and sent shell after armor piercing shell of 20mm cannon fire into the already wounded bomber. “We dropped out of formation and all of a sudden we started getting hammered by German fighters. I mean the attack was relentless, they knew they had us and they weren’t letting go.” Bollinger continues, “We got the word from the pilot to bail out and I left my radio compartment and got the ball turret gunner, Kalas, out of his turret so he could bail out. There was no doubt we were going down. I looked out of one of the waist windows and saw this FW-190 blow by us with is cannons firing and make this beautiful roll out below us and disappear into the clouds. I remember thinking, and this is odd, damn, that guy is really good, that was a beautiful.”

As the FW-190 disappeared into the clouds below, Bollinger’s B-17 continued its death dive. “After snapping out of my momentary lapse of consciousness I said to myself, ‘get the hell out of this death trap’, and I jumped clear.” Bollinger descended towards the ground unaware of the fate of the rest of his crewmen. As he hit the ground he saw Joseph Kalas, the ball turret gunner whom he had helped out of his turret standing nearby. Together he and Kalas decided to head west and hoped to meet friendly resistance workers and return to England. He soon met up with Leonard Kelly, his waist gunner and together all three men successfully evaded capture and returned to England. The other seven members of his crew, Philip Higdon, Louis Ritt, Meyer Hegab, Lawrence Johnston, James Jett, Willard Cronin, and Edward Humphrey languished through the rest of the war as Prisoners of the Third Reich until liberation by Allied Forces in April of 1945.

The German Ace Herbert Huppertz was credited with his 54th kill of the war in shooting down Bollinger and his crew on September 23, 1943 and went on to score an impressive 78 aerial victories before the 25-year-old Ace was killed in a dogfight over Caen by American P-47 “Thunderbolts” on June 8, 1944.

Ardell Bollinger was interviewed by the Museum’s Research Department at his home in Westchester, Pennsylvania on February 13, 2011.

Read more about a chance artifact donation that led us to a Nazi Ace and eventually, Mr. Bollinger.

This post by Manager of Research Services Seth Paridon