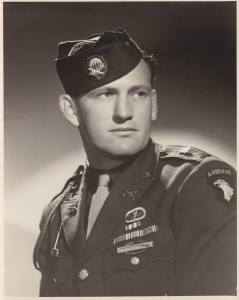 Lynn D. “Buck” Compton, leader of the 2nd Platoon of Easy Company, 506th Parachute Infantry Regiment, 101st Airborne Division, died on February 26, 2012 at the age of 90. During World War II, Compton joined Easy Company in Aldbourne, England and entered combat with them during the invasion of Normandy on June 6, 1944, parachuted into Holland for Operation Market Garden, and suffered through the bitter cold in Bastogne during the Battle of the Bulge. After the war, Compton attended Loyola University Law School on the GI Bill and became lead prosecutor for the trial of Sirhan Sirhan, the murderer of Robert F. Kennedy. He became a judge in the California Courts of Appeal and served there for twenty years, until he retired in 1990.

“Buck” Compton entered the public spotlight when Dr. Stephen Ambrose wrote a book about Compton’s World War II unit entitled Band of Brothers. Several years later, the book became a popular ten-part HBO miniseries that enabled the men of Easy Company to become household names around the world. Even ten years after the series first aired, it is considered one of the most important World War II books and film projects ever produced. Humbled in his service, Compton contiued to promote the series and the story of Easy Company at various military shows and museum events across the country up to the day of his death. He was a good friend and supporter of The National WWII Museum and participated in several events throughout the Museum’s history. We will miss him dearly and will continue to honor his memory with all of the Americans that fought and gave their lives in World War II.

” I don’t think what I personally did in the war was any big deal. The men who didn’t come back again, so that we can enjoy the freedoms we hold today – the men who gave life and limb for us – they are the real heroes. I don’t want anybody venerating me for my military service. Venerate those who live with injuries today and those who didn’t come back.” – Lynn D. “Buck” Compton, Call of Duty: My Life Before, During, and After the Band of Brothers.

This man was a real hero! The greatest generation,like my father who also fought in WWII.Living history,lost forever never taking credit, never talking of the bad time only talking of the good and very funny times!

RIP, sir. Thanks for saving the world.