Within an environment of institutional prejudices and against a stubborn German foe, the legacy of the most famous American service unit of World War II, the Red Ball Express, was forged.  For most of World War II, service units were the predominant assignments given to African-American soldiers.  Although many African-American soldiers found themselves segregated from white units and relegated to non-combat roles in the Quartermaster and Transportation Corps, this did not keep them, or the over 75% African American drivers of the Red Ball Express, out of the fight. 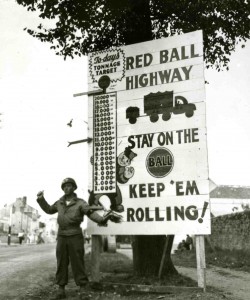 In World War II, the ability of a nation to supply its armed forces with the materiel needed to fight proved just as significant to victory as the performance of its military on the battlefront.  For this reason, World War II is often described as the world’s first “100 percent internal combustion engine war.”  Tanks, trucks, planes and ships all consumed fuel at rapid rates and in voraciously large amounts.  Without a steady supply of petroleum, oil and lubricants, an army’s advance would stall and its soldiers would suffer from the lack of food, ammunition and mechanized support.

The Red Ball Express took its name from a railroad term meaning express freight.  To “red ball” something meant to give it first priority.  During the War, the Red Ball Express was a massive, round-the-clock convoy of supply-trucks, organized in north-western France as an immediate response to the problem of keeping the forward-area elements of the American First and Third Army supplied.  Following the late July 1944 break-out in Normandy, American forces found themselves outpacing the reach of their supply lines.  Some twenty-eight divisions were advancing across France and Belgium, each consuming between 700 – 750 tons of supplies and thousands of gallons of gasoline a day.  The Channel ports of Le Havre and Antwerp were still in German hands and the French railroad system was largely destroyed as a result of Allied bombing.  In an effort to solve this crisis – described by war correspondent Ernie Pyle as “a tactician’s hell and a quartermaster’s purgatory” – and bring the gap between the soldiers at the front and the supply dumps at the Normandy beach-heads, the Red Ball system was born. 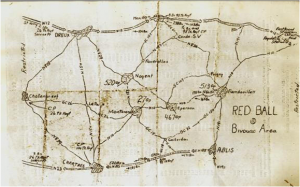 Hand drawn map showing one of the original

In late August, 1944, the Red Ball Highway – two long-distance, one-way ‘loop highway’ routes – was opened at the town of Cherbourg. The highway’s northern route was for delivering supplies and the southern route was for returning convoys, with both routes open only to military traffic.  A shortage of trucks and drivers for the Red Ball Express routes saw any non-essential vehicles pressed into service and many ‘volunteers’ – some of whom had never driven any type of automobile before – thrown behind the wheel and transformed overnight into drivers.  One Red Ball recruit recalled that ‘Red Ball trucks broke, but they didn’t brake.’  On average, over 900 ‘deuce-and-a-half’ trucks were rolling on the Red Ball Highway at any one time, carrying thousands of tons of supplies forward, fueling the American advance. 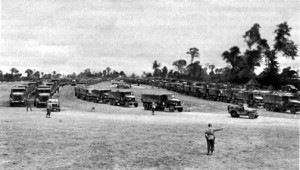 through a regulating point.

Though only in existence for three months, from between August 25th and November 16th, 1944, the importance of the Red Ball Express and the heroic efforts of its drivers was clearly understood by Allied leadership.  Over the course of 83 days, the Red Ball Express and its drivers delivered over 500,000 tons of supplies vital to the American war effort and the liberation of Europe  The Red Ball Express also served as indisputable proof of the quality of African-American soldiers.  In an October, 1944 message to the troops, General Eisenhower was not at all faint in his praise for the Red Ball’s drivers.