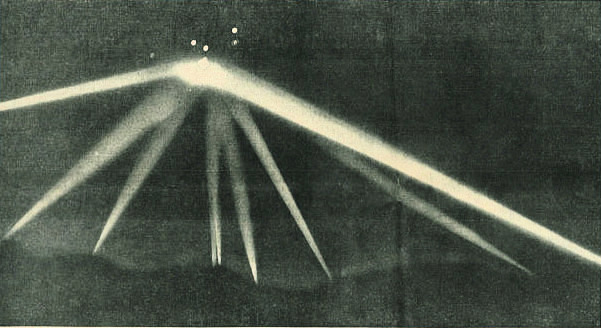 A photograph of the morning’s events from the L.A. Times the day after the scare.

Shortly after the Japanese submarine I-17 successfully shelled an oil refinery near Santa Barbara, fear moved from the depths of the sea to the heights of the sky. First put on edge after the attack on Pearl Harbor, and then frightened two-fold by the ability of the Japanese to reach our coast as proven with the bombardment of Ellwood, the jumpiness of the military and civilians alike was more than reasonable. When Army radar spotted a blip 120 miles off the coast of southern California, an alert was sounded and shortly thereafter a blackout was ordered.

The varying reports of the morning’s events represent the mass confusion and paranoia of the time. Some reported there were just a few planes, while others claimed to have seen several dozen aircraft. There were even reports that planes were shot down, when in reality, nothing was hit by the AA guns—except three civilians killed and a few buildings damaged by friendly fire. Guns fired at the flying object for more than an hour between 3:15 and 4:15 a.m. on 25 February 1942.

To this day it is still uncertain what the flying object actually was, giving rise to many conspiracy theories of aliens, UFOs, and a subsequent government cover-up; but the most likely scenario is that the object was simply a rogue weather balloon. At the time, Army and Navy representatives couldn’t reach an agreement about what actually happened that night, though all agreed that the response—considering the country was at war and the harrowing events of recent months—was justifiable and even commendable. 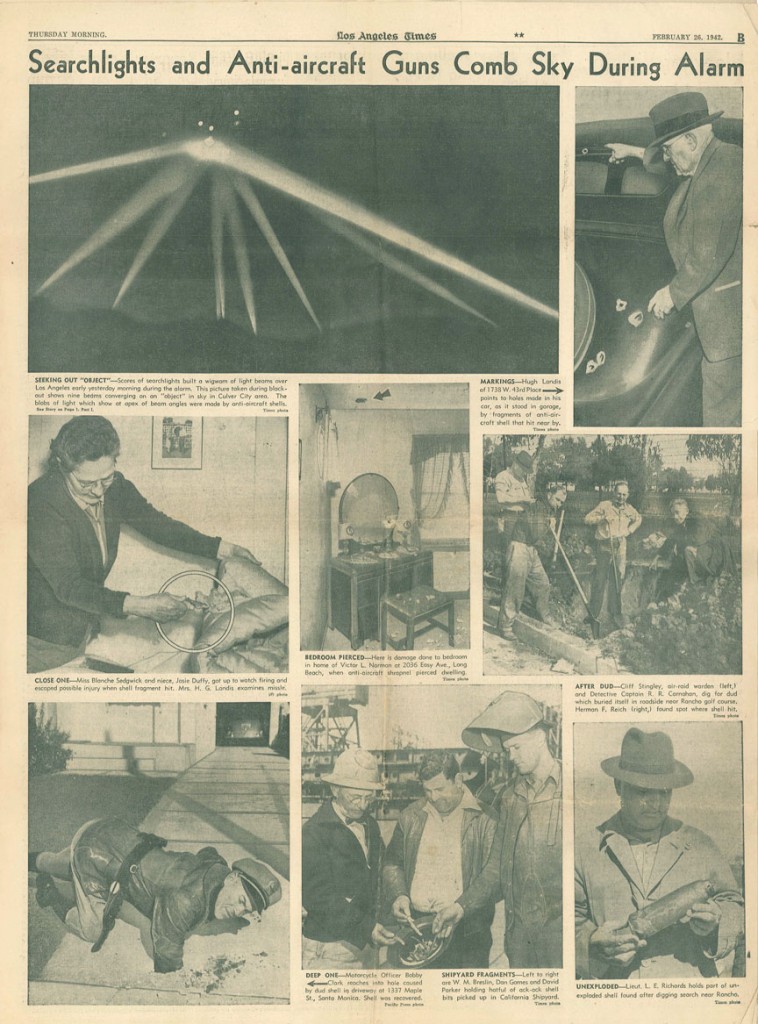 A transcript of a radio report made that morning by then-CBS reporter Byron Palmer, who would later become a Broadway and television actor. His report includes inaccuracies—planes were never sent into the air, for example—again representative of the mass confusion and varying reports being made about the events that morning:

Anti-aircraft guns went into action against unidentified aircraft in the Los Angeles area shortly after 3:00 a.m. Pacific War Time this morning. The antiaircraft guns began barking during a blackout ordered by the 4th Interceptor Command at 2:25 a.m. The unidentified object which some sources thought might be a blimp, moved slowly down the coast toward Santa Monica and disappeared south of Long Beach. Army officials declined to comment on the possibility that the object might have been a blimp. However, it required nearly 30 minutes to travel some 25 miles, far slower than an airplane.

Watchers on a rooftop of the Columbia Broadcasting building in the heart of Hollywood could plainly see the flashes of guns and searchlights sweeping the skies in a wide arc along the coastal area. Concussion of the shells could be felt in downtown Los Angeles 15 miles away. US Army planes quickly took to the dark skies but whether they contacted the object has not been announced. Army officials say they will not comment until they receive a full report on the action. Although some watchers say they saw airplanes in the air, semi-official sources say they probably were the US Army’s pursuit. Several observers say they saw one or more planes spotlighted by 20 or 30 searchlights. The object moved southward, presumably over Huntington Park at the western edge of Los Angeles, and on southward to about Long Beach on the coast. By 3:30 a.m. observers said the object appeared to be over the south of Long Beach. Searchlights closely followed the object down the coast and kept it centered in their glare. Shells frequently can be seen bursting near the object, but none appeared to hit it. The shooting stopped about 3:30 am.

The shooting brought warfare to the front door of this city of a million and a quarter population for the first time since December 7th. Already it was alert to the presence off the southern California coast of a Japanese submarine which had pumped 25 shells into an oilfield north of Santa Barbara Monday evening.  Because of the presence of the submarine, a 3-hour alert was ordered at dusk last night and civilian authorities stood at their posts while the Army and Navy continued their search for the submersible. The evening alert ended at 10:23 p.m., but another was sounded at 2:22 a.m. and the blackout followed within 3 minutes. It covered Los Angeles County from to Santa Monica to Pomona. At 2:27 all southern California radio stations were ordered off the air except those in San Diego. Approximately 20 minutes after the firing died down, the ship returned and headed westward from Long Beach towards Santa Monica. The guns went into action again hurling round after round of shells at the object. The second barrage appeared to be closer to downtown Los Angeles, since watchers could hear the concussion of the guns more clearly and the flash of bursting shells was brighter. Then the ship disappeared for the second time over the ocean. We return you now to CBS in New York.