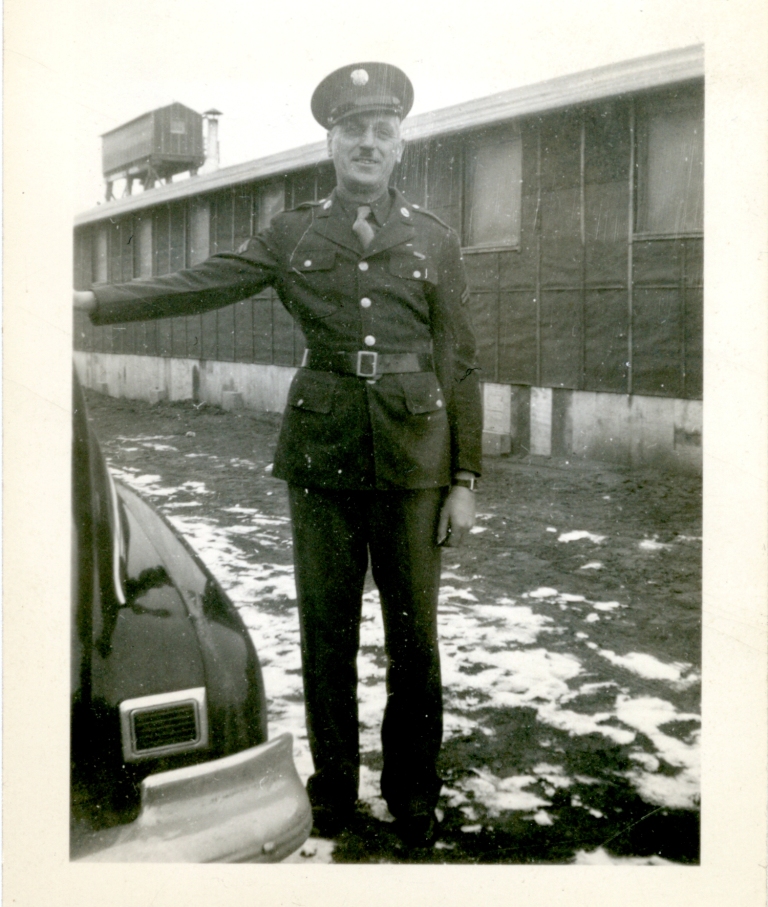 Today marks the 70th anniversary of the first influx of American troops to Great Britain during WWII. The British had been virtually single-handedly holding off the Germans for over two years and the Americans were greeted with both relief and curiosity when they finally landed on British shores.

The American servicemen were stationed from Scotland to Cornwall (and all parts between).  Sent in advance of the planned invasion of Europe, these troops were anxious to join the fight against Hitler. Sailors, airmen and soldiers were ferried over in convoys by the thousands and by the end of the war 1.5 million would be stationed in Great Britain or would pass on through to fight towards Germany.

Although the British (for the most part) were glad to see the American servicemen, there were complications and resentments. The British had been at war for over two years and were well used to going without and making due. When the Americans arrived their stomachs were full (and so were their pockets).

Because many of servicemen had never been abroad before, the War Department sent with them a pamphlet called Instructions for American Servicemen in Britain. This pamphlet was designed to familiarize these servicemen with life in Britain-the history, culture, even the slang. The pamphlet also encouraged the men to get along with the British to help defeat Hitler. It is filled with great advice like “Don’t be a show off,” “NEVER criticize the King or Queen,” and “The British don’t know how to make a good cup of coffee. You don’t know how to make a good cup of tea. It’s an even swap.” The pamphlet concludes by telling the servicemen that while in Great Britain, their slogan should be “It is always impolite to criticize your hosts; it is militarily stupid to criticize your allies.”

In the Education Department’s Collection, we have letters, photos and V-MAIL from servicemen stationed in Great Britain.  They describe what it was like to be away from home for the first time. In a V-MAIL letter from January 1944, PVT. Earl Jenkins tells an old friend in Pennsylvania that “the sun doesn’t come out much” and “I don’t know why I ever thought I’d like to come here for. It’s alright in spots. But only a very few spots.” He writes again in February about the waiting. “I sure wish they would get started here. It really gets on your nerves just to sit and think about it.” Clell Bailey writes his nephew how much “one appreciates getting mail in the E.T.U.” 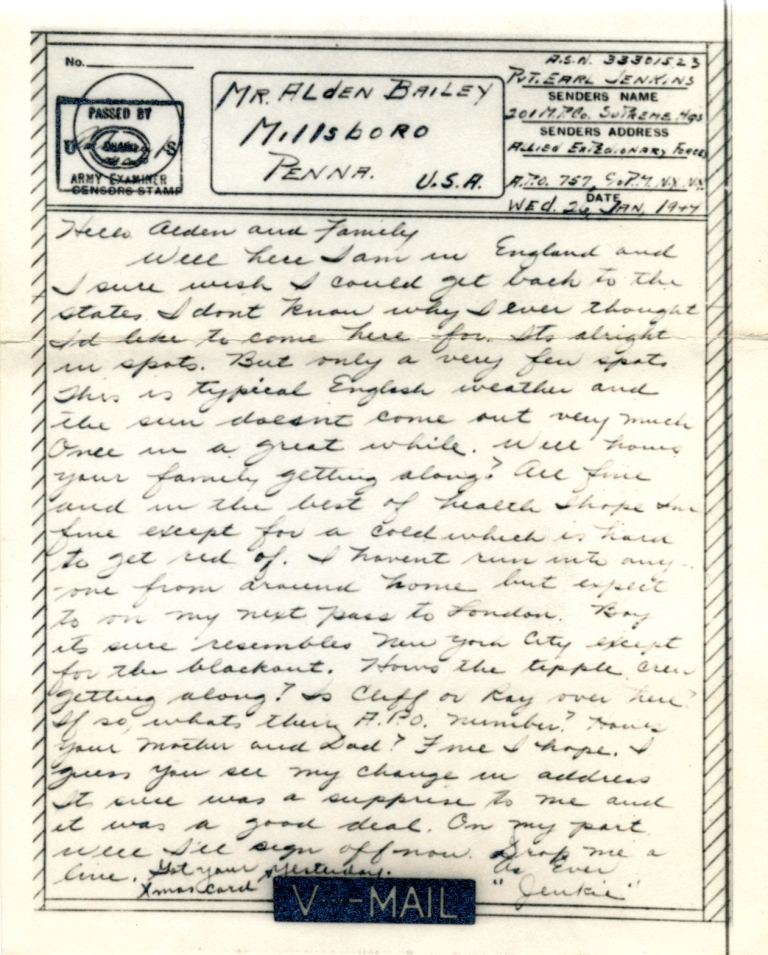 One of my favorite letters comes from John Husak, writing about his time in London. He writes to a friend back home, “Boy! Alden, as long as there is an England I won’t have to worry about being a bachelor.” Later in the letter he says that “the air raid shelters sure come in handy when you are courting a girl.” Toward the end of the letter he comes to the conclusion that it might not be his personal charms that keep the ladies attentive but the “chewing gum, candy etc.” that he has access to. 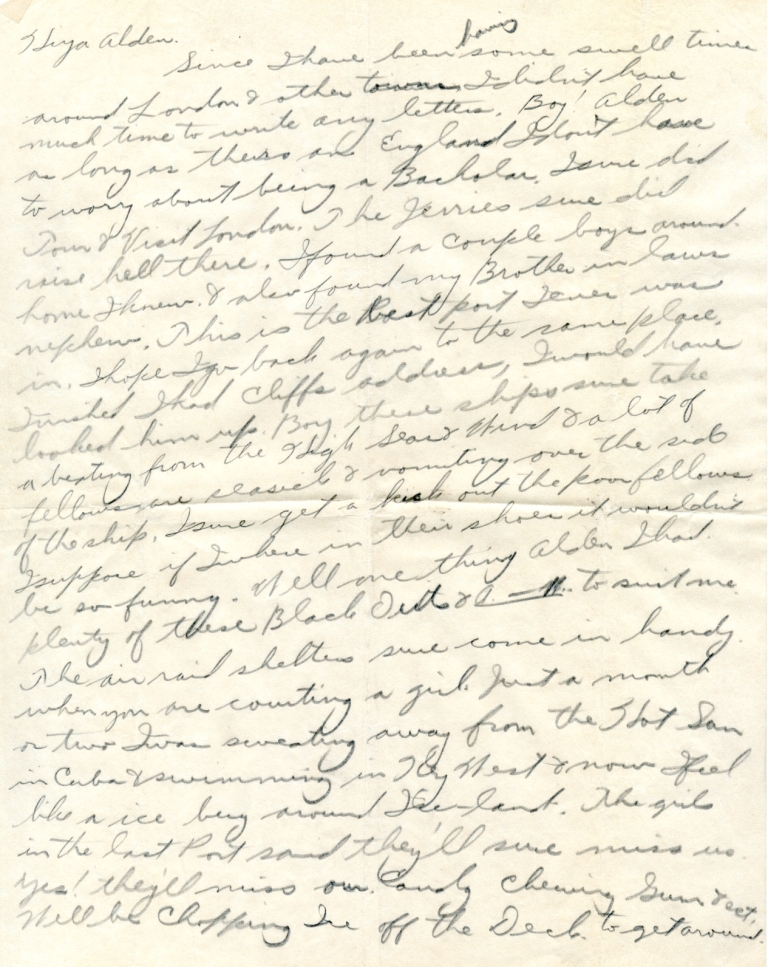 The American servicemen in England knew how important and dangerous their mission was- But they flew and fought, defending our country and defeating the Nazis. When the war ended, our relationship with Great Britain did not. Over 60,000 British women married American servicemen and came to the United States, many children were born from relationships formed during the war and we continue to enjoy a “Special Relationship” with our allies across the pond.

Your Grandfather would be so excited to see the letters he received used for the Museum. He loved history and would be very proud of your work , as am I.
Mom

Yesterday I had the priviledge of talking to a proud World War 2 veteran. He made me feel proud to be an American. Thank you for this wonderful article. And, some Americans do know how to make a cup of tea!

Laura,
Now that I work for the Department of Military & Veterans Affairs, I have had the pleasure of working with veterans and it makes me feel blessed to work amongst them for their bravery and sacrifices. Because of them, I have enjoyed a peaceful life. The letters you posted are a pleasure to read because they remind us of how the soldiers were able to bond and remain hopeful inspite of their mission at war. I wish Alden, your beloved Pap Pap, could read this article. Excellent work.

I remember Earl Jenkins and I think I knew Alden, Cliff and Ray Bailey. Cliff Bailey had his squadron fly over the Monongahela River and dip their wings for me upon their return after the war. At least, I was sure it was all for me. I was 5 years old at the time. I remember the blackouts too. I am sorry I do not tweet. Others should be made aware of your blog. Good Job!
Can’t wait to visit the Museum. Americans too often forget these sacrifices.

From “Rich Relations”, Random House, 1995, by David Reynolds: “A British newspaper, the Daily Express reminisced in 1979: The G.I.s…came with saunter and swagger, with brashness and boisterousness. They came with five times the money of the British Tommy and with friendly charm which conquered the heart of many a British maiden or otherwise….One joke heralded a new brand of knickers: ‘One Yank and they’re off.’

Leave a Reply to Pat Callaghan