Dr. King and his wife Coretta with Dr. Ralph Bunche, who worked as an analyst in the Office of Strategic Services during WWII.

While we often think of post-war America as a prosperous time, not all Americans benefited from the booming economy. In particular, despite achieving a number of successes during World War II, African American men and women found themselves once again on the outside of equality and prosperity. In 1941, fewer than 4,000 African Americans were serving in the military and only twelve African Americans had become officers. By 1945, more than 1.2 million African Americans would be serving in uniform on the Home Front, in Europe, and the Pacific (including thousands of African American women in the Women’s auxiliaries). Yet after WWII ended, many African Americans were either jobless or put in positions without room for promotion, often making only a fraction of what their white counterparts would make.

Though he was barely a teenager when World War II began, Dr. Martin Luther King, Jr. became an integral part of the post-war African American struggle for equality, working alongside veterans like Medger Evers, Nelson Peery, Louis Stokes and Oliver Brown (of Brown v. Board of Education). The movement itself was divided; black veterans involved in the movement had mixed views on how radical they were willing to be in their protest. Veteran Bill Payne once said, “A lot of the sixties movement came from some of the veterans who came back after World War II with radical ideas…. I wasn’t one of those people; I was never considered radical. But I say more power to those that were radical.”

Dr. King served as a bridge between these two camps, and moderated many of the debates that took place when planning protest rallies. Ultimately, many WWII veterans served as a force for peace and security at Civil Rights rallies, aiming to prevent violence. Most notably, 1963’s March on Washington had no incidences of reported violence thanks to the group of black veterans who were in charge of security.

One of the biggest problems black veterans faced upon returning to the United States was job security. Many who found jobs were still at a disadvantage, often making only a fraction of what a white worker doing the same job would. Labor unions like the United Auto Workers banned black workers from joining; Dr. King recognized issues like unionization and fair wages as integral to the struggle for Civil Rights, assisting in cities like Detroit with labor strikes and other protests.

On April 3, 1968, Dr. King would give the last speech of his career in Memphis, TN in support of black sanitation workers who were fighting for higher wages and fair treatment. Bayard Rustin, a Quaker and pacifist who had protested against Japanese American internment during World War II, was also present. The rally brought out the typical death threats that Dr. King received, but he chose to go forward anyway, giving his iconic “I’ve Been to the Mountaintop” address.

The next evening, Dr. King was killed. Standing on the balcony of his motel room, he was shot in through the cheek. His close friend, World War II veteran Reverend Ralph Abernathy, heard the shot and ran outside, where he found Dr. King bleeding to death. Doctors attempted emergency surgery, but he was pronounced dead an hour later. 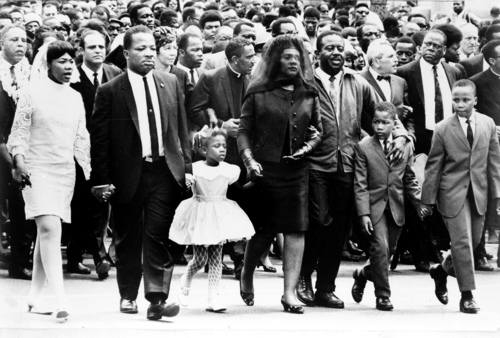 Reverend Abernathy and Dr. King’s wife and children walk in the funeral procession on April 9, 1968.

Their experiences serving in World War II empowered many black veterans to fight for their Civil Rights, and Dr. King gave those men and women a platform to find their voices. Without his contributions, the United States after World War II would have looked very different. This Martin Luther King Day, we hope you take some time to learn about the Civil Rights Movement, the cause for which he gave his life.

If you’d like to learn more about the experiences of African American GI’s and the ways in which World War II veterans became involved in the Civil Rights Movement, look for more blog posts leading up to Black History Month, and join us for the following programs:

On February 15, 2012 at 12pm, join us for a free lecture on African American soldiers and their experiences in Post-war American society.

Can’t make it to the Museum? On February 16, 2012, log on for our free electronic field trip, Fighting for Double Victory. Get specific times and register today!