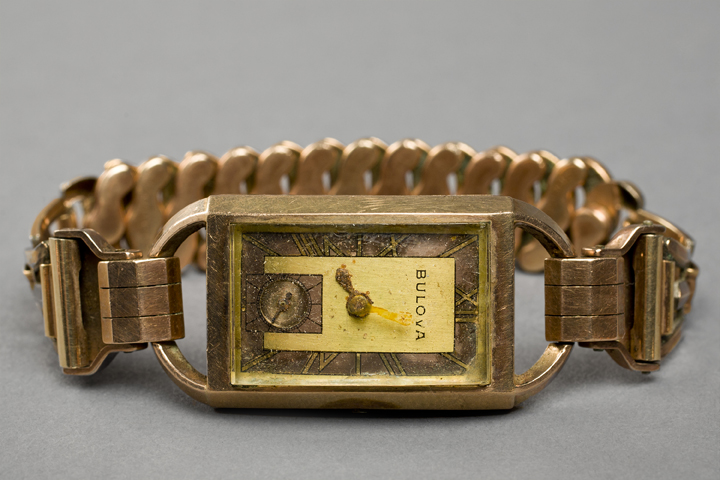 December 7, 1941, was a day that would live forever in the memory of any American who was alive and old enough to understand the magnitude of the surprise Japanese attack on Pearl Harbor. Roy S. “Swede” Boreen not only remembers the attack first-hand as a survivor, he has a concrete reminder of the instant when everything changed.

When  Boreen was interviewed by the Museumin early 2011, he donated the watch he wore on the day of the attack. The 21-jewel Bulova watch was significant because it had marked the exact second he hit the water to take cover from an enemy fighter – 8:04 am.

On December 7, 1944, Boreen posed for a publicity shoot for a war bond drive aboard the raised hulk of the Oklahoma. He was standing on the same ladder he had taken to escape the ship three years to the day before and wearing an identical Bulova watch, a replacement for his more historic timepiece.

Boreen’s watch is currently featured in the Museum exhibit Infamy – December 1941. Scroll down to read his story. 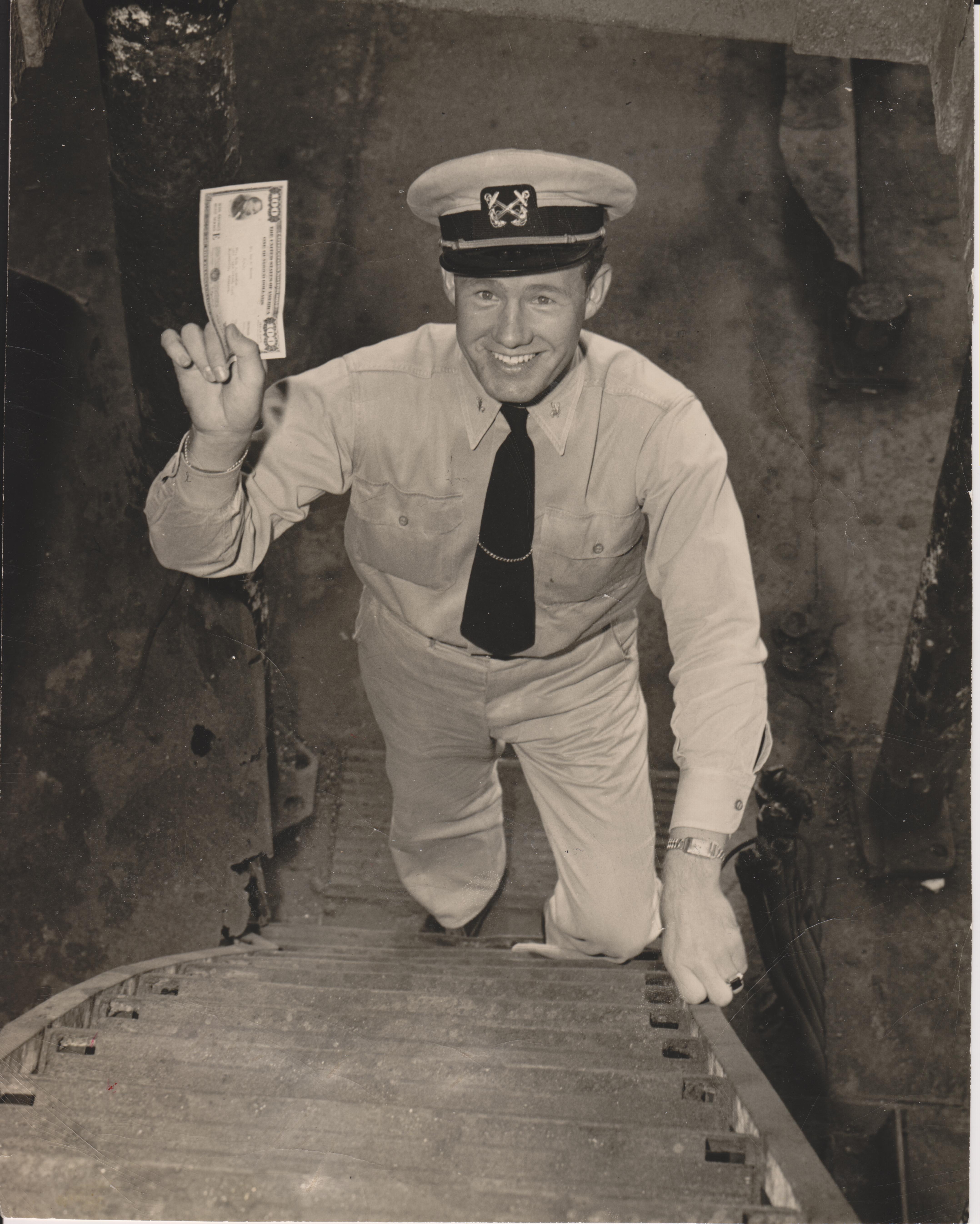 Roy S. “Swede” Boreen was born in Minneapolis, MN to Swedish immigrant parents. As a young man, Boreen’s father had proudly served in the Swedish Navy and openly wished that at least one of his sons would carry on that tradition. Swede decided that he would be the one to follow in his father’s footsteps and enlisted in the US Navy on August 3, 1938.

After completing three months of boot training at Great Lakes Naval Training Center, Boreen was assigned to the battleship USS Oklahoma (BB-37). He reported aboard and was assigned to the 3rd Division Deck Force where his job was to help clean and maintain the ship. One of his most memorable details was the scrubbing of the Oklahoma’s wooden deck every Friday with a sandstone or “holystone.” After two years, Boreen was promoted and transferred to the ship’s disbursement office.

On the morning of December 7, 1941, Boreen got up before 0700 and had breakfast. After he had finished eating, he reported to the disbursement office. It was 0715 and Boreen was to meet a sailor who was about to depart the ship on re-enlistment leave.

At roughly 0755, Boreen heard the call to general quarters. He left the disbursement office and went immediately to his general quarter’s station in the powder room for the #3 turret where he was a powder handler. Seeing no one there, he began to make his way up to the main deck. On his way to the staircase which would take him topside, he passed a large porthole which he glanced through as he passed by. To his amazement he saw a Japanese “Kate” torpedo plane fly right over his ship. The plane was so close that Boreen could clearly see the smile on the face of the Japanese pilot and the large red “meatballs” on the wings of the aircraft he was flying.

After wiping the oil from his eyes, he could see that the room was quickly filling up with water. Seeing an open hatch above him he climbed up to the next level where he encountered two of his shipmates, one of them badly wounded. Boreen then noticed that the hatch leading out onto the main deck above him was being closed. Before the hatch was closed he hollered out for the sailors above him to hold it open for a moment so that he and his shipmates could come up. Swede told the two men to exit the compartment, but having not heard an abandon ship order, they believed that the ship would soon stabilize and that everything would be fine. Boreen left them and went up to the main deck. The topside sailors closed the hatch behind him and dogged it down. The two sailors Boreen left on the deck below were trapped when the ship capsized and did not survive.

By the time Boreen got topside, the Oklahoma was listing badly to port. He climbed down the side and sat down on one of the torpedo blisters for a brief rest. Moments after sitting down he looked up and saw a flight of enemy bombers heading in his direction. Boreen looked on as one of the falling explosives from the aircraft above detonated the powder magazine aboard the USS Arizona (BB-39). Even though his view of the Arizona was blocked by the battleships Tennessee (BB-43) and West Virginia (BB-48), he had no trouble seeing the massive explosion which sent smoke and flames hundreds of feet into the air.

While still somewhat shocked at seeing what had just happened to the Arizona, Boreen knew to get out of the way when he spotted a Japanese “Zero” fighter heading down Battleship Row. He dove into the water and hid beneath the mooring camel that separated the Oklahoma from the USS Maryland (BB-46). From there he watched as the Zero fired at the sailors still on the sides of the Oklahoma and in the water next to her.

When the second wave of the attack was over, Boreen was pulled aboard the battleship Maryland where the sailors gave him towels to wipe the oil off of himself and a clean set of clothes to wear. After gulping a cup of black coffee and sucking down a cigarette, Boreen was informed that all Oklahoma sailors were to report to an assembly area on Ford Island. After a muster roll was taken, several of the sailors, Boreen included, were issued rifles and given patrol areas for the night.

Following the attack, he held various posts at Pearl Harbor and spent some time on Midway Island. Making a career of the Navy, Swede Boreen retired from active duty as a CWO4 in 1959 after 21 years of service to his country.

Swede Boreen was interviewed by historian/curator, Joey Balfour, at his home in Pinehurst, NC.

G’Day! Nww2m,
Interesting Post, The Japanese attack on Pearl Harbor on December 7, 1941, is a day in history that will permanently “are living in infamy” in the recollections of so many People in america. The shock attack destroyed 5 US Navy battleships and harmed 3 some others. It also claimed a good deal more than 2,four hundred People in america.
Thanks

I am currently developing a documentary called Children of Pearl about a rare group of Pearl Harbor survivors – the children who part of military families at Pearl on Dec. 7, 1941. My associates and I hope to show a new (and true) perspective on the “day of infamy” – from a kid’s point of view.

Thanks for any interest. We look forward to presenting an important recollection of Pearl by the end of 2012.

And thanks to all who keep the history of Pearl Harbor alive.