Hi. I hope you people haven’t worried too much. I sent a telegram yesterday in hopes that you wouldn’t. I know you will understand how busy we’ve been, so excuse me for being so tardy with this first letter.

I have already told you that I am O.K. in the telegram, which by the way I almost sent collect to convince you that it was me that sent it. They told me at the radio station that it would only take 24 hours at the most to reach you. I hope it did. I also sent a card the beginning of the week which you will probably receive last.

I  received a letter from you the other day and was very glad to hear from you. That was the one in which you told me that Marion and her folks were down to see you. I’m sure she’ll be down more often now. So far I’ve only written her a card, but I will also write to her this morning if I can. I hope you sent word to her as soon as you received the gram.

I’ve had to stop writing this 3 times. Here it is Mon. night 8:30. Up since pretty early this morning and quite tired. The greater part of the afternoon I was working in the rear end of the ship I’m on, which for me is pretty close quarters and left me feeling sort of kinky. The boys are doing a swell job of it though and are really taking this whole affair in swell spirits.

I’ve been living or rather sleeping at 3 or 4 different places in the past week. Johnnie and several other fellows and I have managed to stick together though. Wish you could see us at times or maybe it’s better you don’t.  I think you might consider disowning me. We still manage to find time to shower and get in some clean clothing. Incidentally, I had a couple of pairs of socks that I wore out on the field which when I took them off I believe would have stuck to the wall if I threw them hard enough. Well anyway I washed them, and I’m telling you I surprised myself. I hope you don’t tell Marion of this, as it would sort of make things a bit difficult if and when I should decide to take her out of circulation, unless someone beats me to it. The boys still rib me about me thinking a gal would wait that long.

I’m sorry pop didn’t have a chance to write a few lines, but then I guess he would have if he could. I also wish you’d tell Elizabeth to just not worry about my taking care of myself such as she has been doing, because it if continues I’ll just have to remind her of her age. That ought to hold her for awhile.

Well mom I’ve just about rambled on enough for one letter and I think I’ll hit the hay and get this off in the morning.

By the way I hope this gets to you before the 26th because I’m going to wish all a Merry Xmas and Happy New Year. I really mean it although things are a bit upset, but it’s nothing that can’t be straightened out. That alone should make us all be able to keep in good spirits. Don’t forget now chins up and please don’t worry. I’d  feel a lot better knowing things were that way. So till the next time. I’ll be seeing you.

With Love to You All,
Henry

P.S. Take care of yourselves, and be good. That’s all you have to do. Today I also sent Marion a telegram. I thought I should. 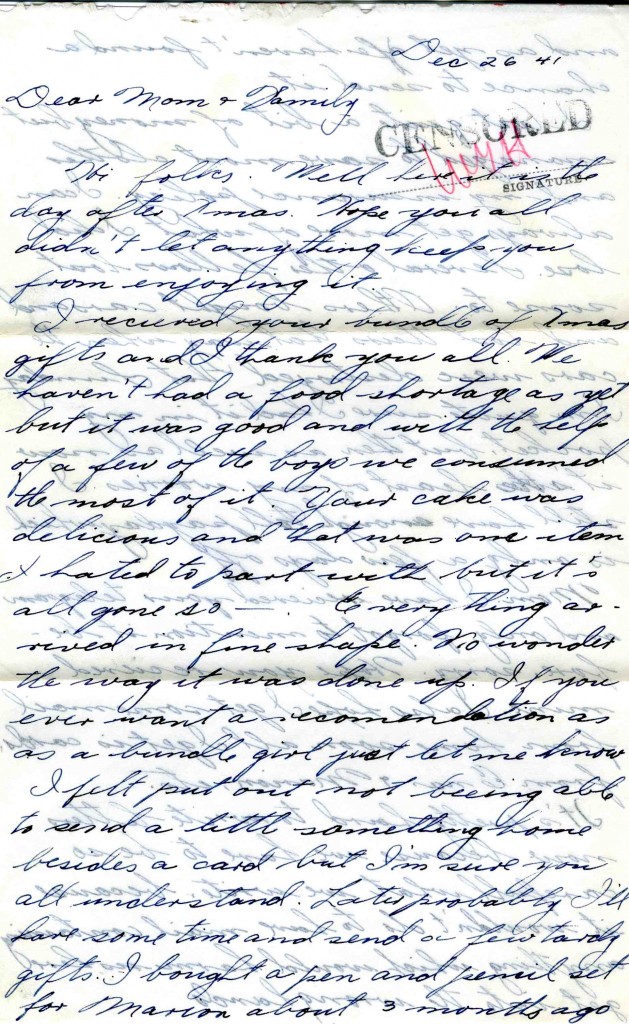 Hi folks. Well here it is the day after Xmas. Hope you all didn’t let anything keep you from enjoying it.

I received your bundle of Xmas gifts and I thank you all. We haven’t had a food shortage as yet but it was good and with the help of a few of the boys we consumed the most of it. Your cake was delicious and that was item I hated to part with but it’s all gone so – . Everything arrived in fine shape. No wonder the way it was done up. If you ever wanted a recommendation as as [sic] a bundle girl just let me know.

I felt put out not being able to send a little something home besides a card but I’m sure you all understand. Later probably I’ll have some time and send a few tardy gifts. I bought a pen and pencil set for Marion about 3 months ago and as yet haven’t found a chance to send it.

I lost quite a bit of money but managed to save most clothes and my insurance policy. I can always get more of what I did lose. Several of the fellows lost some to [sic]. Others bought cars and lost theirs that way when the cars were destroyed that Sunday. I’m quite sure I had it in my pocket, but then as well as now it’s the least of my worries. I still have enough till payday which is only a few days off.

Mom I have received your telegram and only forgot to mention if before, sorry. Hope you received mine. I also hope I get some mail from home soon all I get is cards from Eva (?) and Marion, etc.

It’s pretty hard to write letters now because we have to be so carefull [sic] what we write, because it wouldn’t do to have mail containing anything which would harm us here get into the wrong hands.

Another thing from now on address my mail in the following way.

Our squadron can’t be written on either the envelope or the letter although we are the same outfit as No. 21. Our work is coming along swell the only difference is that now we are kept more busy, and now I have a ship of my own.

I just sampled your nut bread and I think it’s pretty good. I think that if Pop didn’t beat me to it, I’d marry you myself.

I went up to the hospital with Johnnie to see a few of the boys. I guess they’ll all pull through O.K. Paul was pretty bad but he’s swell now and Sampson (?) the fellow from Brockton is still pretty bad. He and a few fellows are gone back to the mainland. I’m glad for them because they’ll get better much quicker there. Paul will be back with us soon because the way he’s improved is proof that he’s got what it takes. I started kidding him about only the good dying young and that’s the reason he got off so easy. He’s type of a guy that doesn’t even cuss or drink anything stronger than a coke so he got a kick out of it.

Well folks I go on duty in about an hour so I’ll close for now and will try to write again soon. See you again.

Love To You All,

P.S. Everything in the bundle was O.K. and tell Elizabeth that the snow ball was pretty cute. The wallet will come in handy for next pay day. I want to add again to please not worry, either one of you. Everything is under control now and worrying is only a foolish pass time [sic] and a lot of wasted time. Promise.

Take care of yourselves.

Corporal Henry G. Rieth served as an airplane maintenance technician in the Sixth [6th] Night Fighter Squadron (Named 6th Pursuit Squadron (Interceptor) on December 6, 1939; Redesignated: 6th Fighter Squadron on May 15, 1942; Redesignated: 6th Night Fighter Squadron on January 17, 1943) then 1010th Army Air Force Base Unit (B), serving from August 1940 to an honorable discharge in May 1945. Reith served 55-57 months in the Army, 39 months overseas, including experiencing the attack on Pearl Harbor while stationed in Hawaii. Rieth’s parents immigrated to the United States from Germany in 1914.

Thank you so much for sharing that with us.