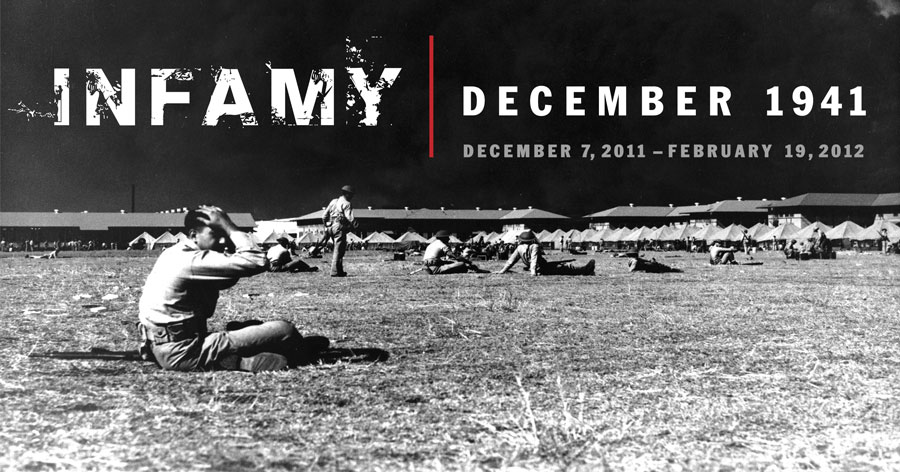 On December 7, 2011, The National WWII Museum will debut a new exhibit that commemorates not only the 70th anniversary of the costly attack on Pearl Harbor, but also sheds light on the lesser known attacks on Guam, Wake Island and the Philippines that took place over the course of one day.

Infamy – December 1941 will open to the public at 10:00 a.m. on December 7th, and will be on view through February 19, 2012 in the Joe W. and D. D. Brown Foundation Special Exhibit Gallery in the Louisiana Memorial Pavilion

View oral histories, images and artifacts from the exhibit.

Pearl Harbor Day at the Museum

In addition to the opening of Infamy – December 1941, the Museum will offer a full day of events to commemorate the 70th anniversary of Pearl Harbor. Visitors will have the opportunity to experience a guided tour of the Pacific galleries, attend a ceremony to honor those who were affected by the attack, see the special presentation The Raid on Pearl Harbor by Captain Rick Jacobs, meet with exhibit curators Eric Rivet and Meg Roussel and learn more about the making of Infamy – December 1941 and meet with Bataan Death March survivor Col. Glenn D. Frazier.Pearl harbor survivors will also be hand visiting the Museum with their families.

Follow @wwiitoday for updates on WWII 70th anniversaries starting on December 7, the start of official US involvement.