Coca-Cola: The Pause That Refreshed 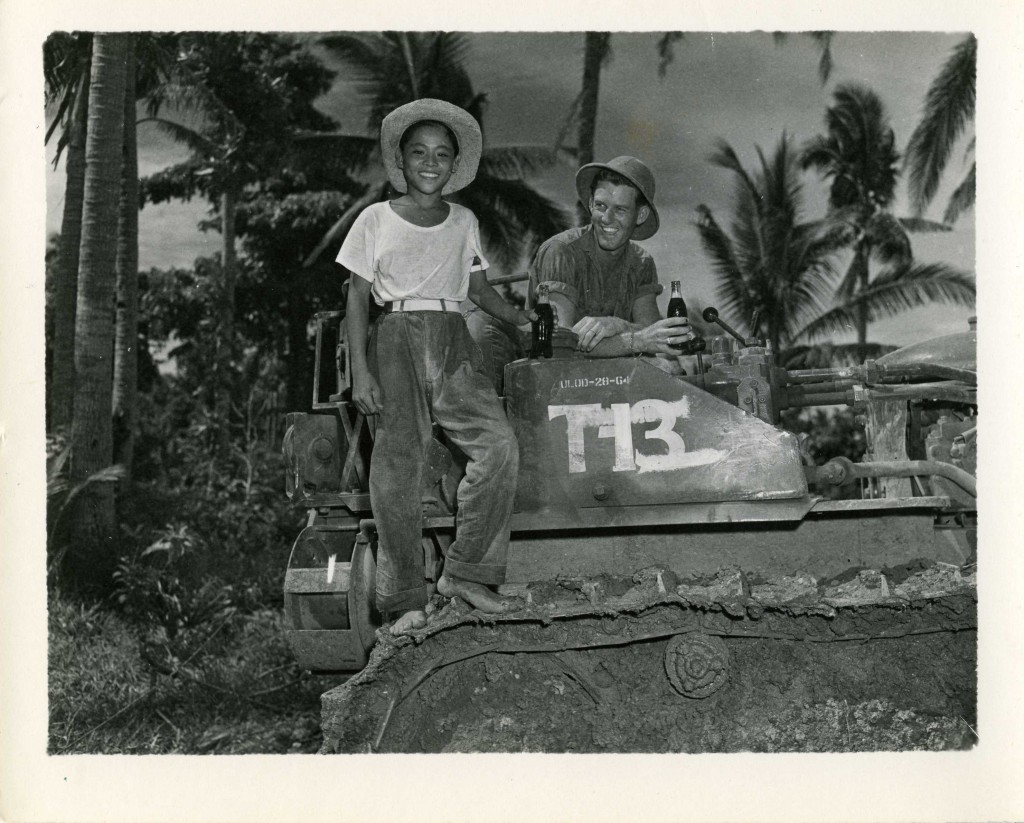 A young boy and a bulldozer operator with the 64th Seabees drinking cokes in Tubabao, Samar, the Philippines. Gift of James L. Dale, The National WWII Museum Inc., 2003.083.059

Coca-Cola and the American Fighting Man in World War II

By the time the United States entered World War II in December 1941, Coca-Cola was already established as a symbol of the American way of life. In countless letters home, soldiers serving abroad spoke of fighting for the little things, like an ice cold Coke, rather than politics or ideology. In a mutually beneficial edict, Coca-Cola Company president Robert W. Woodruff declared that any American in uniform could get a Coke for 5¢, regardless of the listed price or cost of production. For the men serving overseas, however, a soda fountain had become a foreign concept; foreign, that is, until 1943 when Gen. Dwight Eisenhower sought to make the soda available to his soldiers as close to the battle front as possible.

In an attempt to raise and maintain morale, Eisenhower sent an urgent telegram to the States requesting 3 million bottled Cokes to be shipped to North Africa—where at this time he was serving as Supreme Commander Allied Expeditionary Force—along with the equipment and supplies needed to wash, refill, bottle, and cap that same amount twice monthly without, of course, displacing necessary military cargo. Once approved by Army Chief of Staff George C. Marshall, the Coca-Cola Company was more than happy to comply with Eisenhower’s orders. Treated as a wartime necessity, the Coca-Cola bottling plants established near the front lines were allotted considerably larger sugar rations than the half-share allowed to the company for production of the beverages intended for civilian consumption in the States.

Once the bottling plants were installed overseas, the next issue became maintaining the makeshift factories without sacrificing necessary military manpower. As an answer, the Coca-Cola Company sent 148 of its employees abroad to oversee the installation and management of the plants. These men were given US Army uniforms with the rank of Technical Observer and were treated as officers, although they had no military duties to speak of. Although one might think this would cause friction between the fighting men who sacrificed everything and the Coca-Cola men who led a life of relative leisure, the relationship was quite the opposite. In fact, servicemen would often go out of their way to ease travel restrictions and other obstacles for the “Coca-Cola Colonels” as they were affectionately called.

Endless quotes from letters home expressed the same sentiment. One V-mail from the archival collection of The National WWII Museum shows that the availability of Coke truly served its purpose as a morale builder:

Dear Folks, You’ll never guess what I had to drink this evening. Not whiskey, not gin, not Calvados, not beer, but good old fashioned “Coca-Cola” in the bottle that’s made to fit the hand. Just a few moments before we left our staging area to board the boat Dick and I bought two Cokes, and drank them to the next time we’d be drinking bottled Cokes, believing that that would be in the USA. But not so! As part of our PX ration this week each man received two Cokes for which he paid four francs, and although some people may debate whether rye or bourbon are America’s national drinks, when I saw the excitement caused by a case of Cokes and the remarks about the corner drugstore, I did not think the national drink was quite that strong!

Coca-Cola’s advertisements during the war addressed the softer sides of the conflict. Rather than show war-weary soldiers enjoying their product, the company focused on Coke’s ability to bring people and nations together, as seen in ads portraying GIs intermingling and laughing over Cokes with British, Polish, Soviet and other allies from Alaska and Hawaii to Brazil and China, always with a caption along the lines of: “Have a ‘Coke’—a way of saying we’re with you.” The Coca-Cola Company also took advantage of their well-established slogan “The pause that refreshes” by applying it to Home Front workers, often Rosie the Riveter-style women whom they encouraged to take a break from building planes and ships. The idea behind the ads, which was supported by a scientific research project completed in 1941 by Coca-Cola executives, was that Home Front workers and soldiers alike would work more efficiently if given a moment to pause and refresh themselves with a Coke. One advertisement makes the case, “Men work better refreshed…A nation at war strains forward in productive effort in a new tempo … In times like these Coca-Cola is doing a necessary job for workers.”

While the Coca-Cola Company was busy boosting the morale of American fighting forces, they were simultaneously laying the groundwork for becoming an international symbol of refreshment and solidarity. Many of the bottling plants established overseas during the war continued to operate as non-military factories after the war’s end. Furthermore, GIs liberating towns throughout Europe or working side-by-side with locals in the Philippines felt pride in sharing their favorite drink with their new-found friends. They thereby created an enormous consumer base throughout the world that would not have been possible without Eisenhower and the Coca-Cola Company’s cooperation in working towards bettering the morale of the American fighting man. 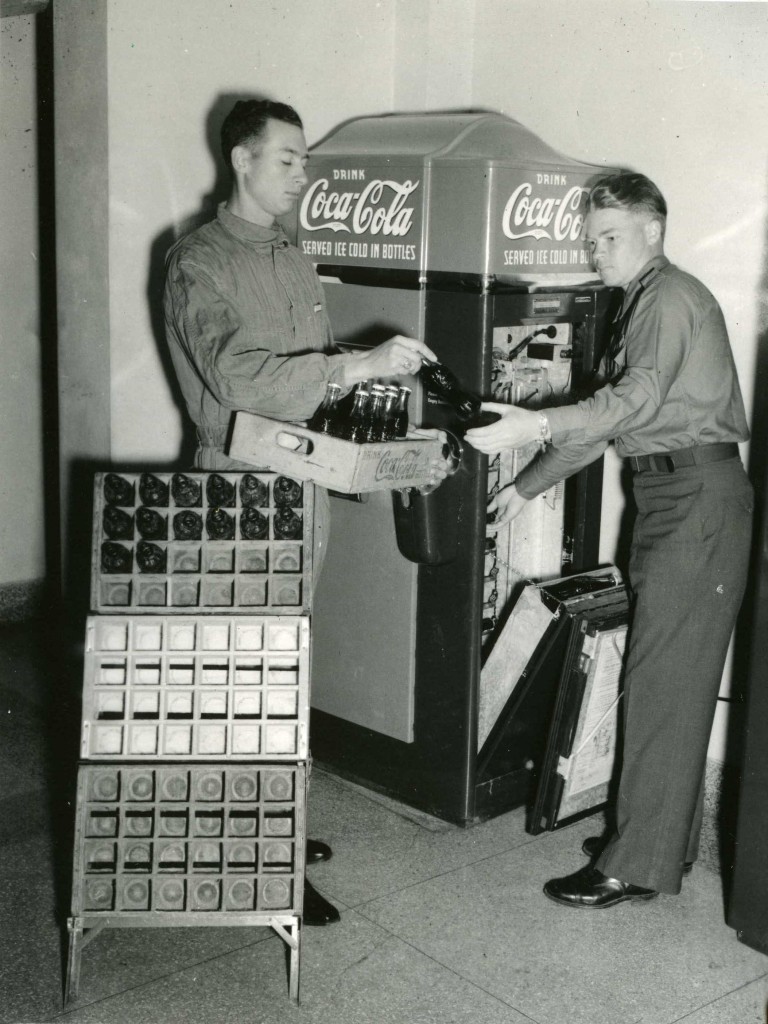 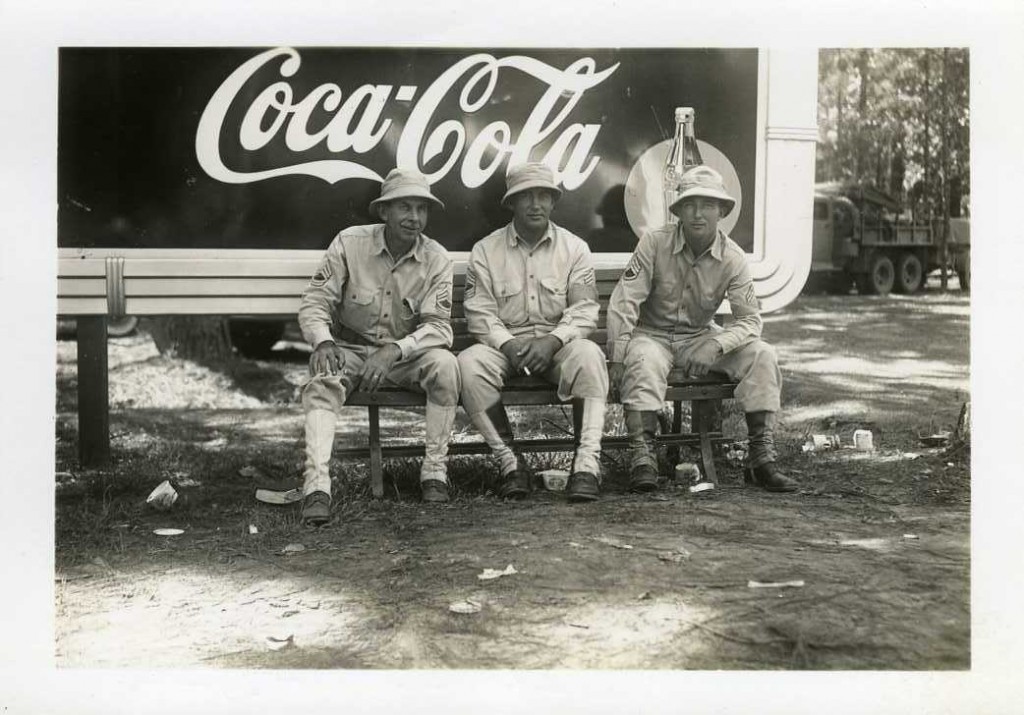 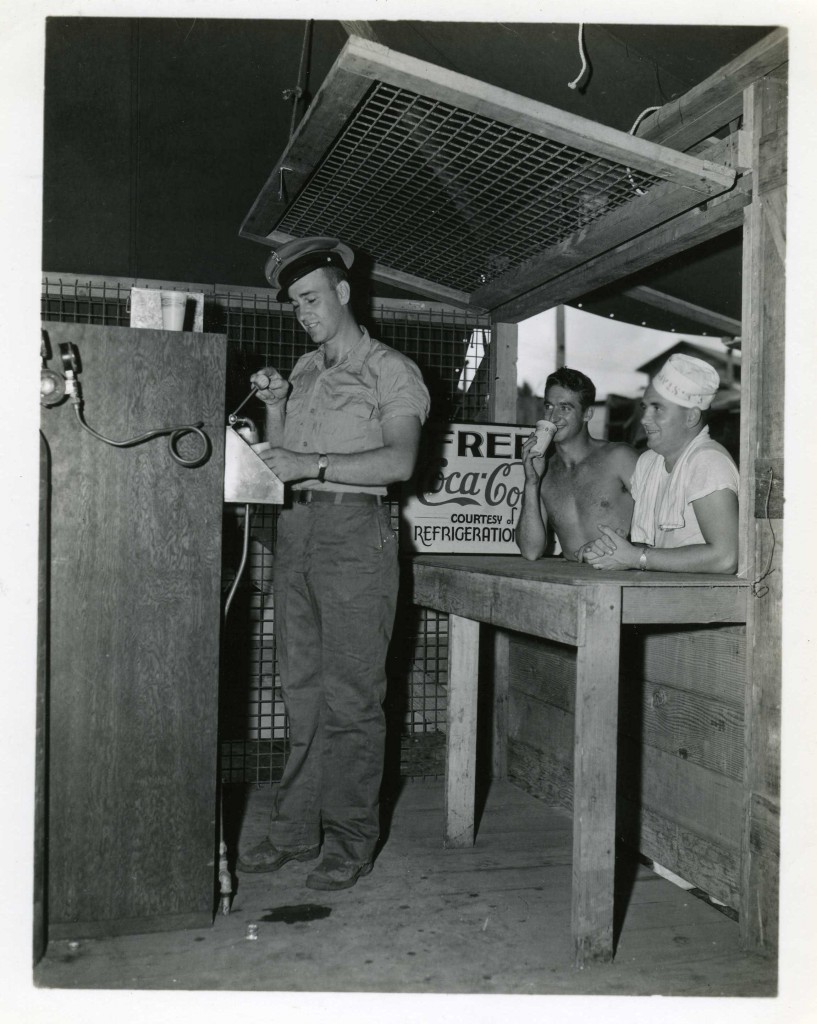 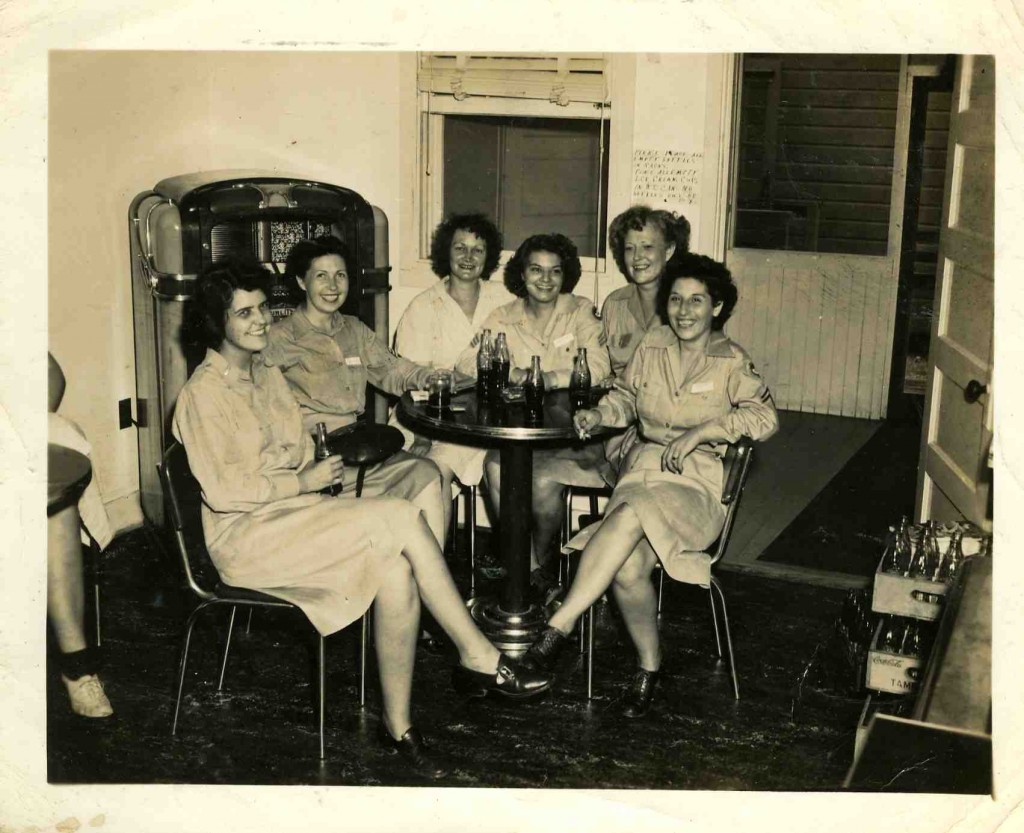 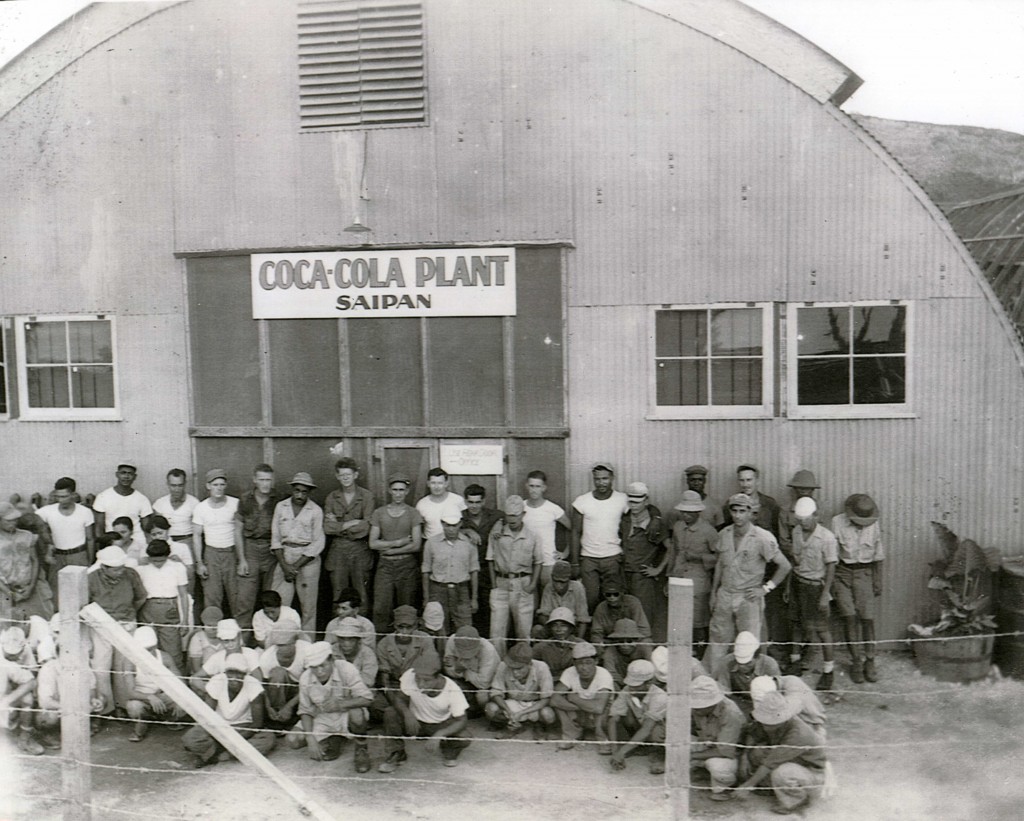 The staff of the Coca-Cola bottling plant established on Saipan. Gift of Precilla Porche, The National WWII Museum Inc., 2001.464.002

One Response to “Coca-Cola: The Pause That Refreshed”

Thanks for the info, really helped

Sailboats, celery trunks, and cheese puffs – oh my! Signals – WWII in the News